When Madonna appeared on her Aretha Franklin tribute at the 2018 MTV Video Music Awards, she was dressed in an outfit worn by the Berber or Amazigh community in Morocco.

So many people were not impressed by the outfit, some even referring to it as a ‘witchdoctor’ attire. Little do they know the fasniating background and meaning of the outfit.

Im with the Winner!! The beautiful @camila_cabello ! So proud of her! ???. And just to clarify: I was asked to present video of the year by MTV! And then they asked me to share any anecdotes I had in my career connected to Aretha Franklin! I shared a part of my journey and thanked Aretha for inspiring me along the way. I did not intend to do a tribute to her! That would be impossible in 2 minutes with all the noise and tinsel of an award show. I could never do her justice in this context or environment. Unfortunately most people have short attention spans, and are so quick to judge. I love Aretha! R.E.S.P.E.C.T. ??. I Love Camilla! Congrats! I LOVE my dress! AND. I love-L O V E!! ♥️ and there is nothing anyone can say or do that will change that. #vmas #postivevibes

The headgear is worn by the women of the Berber community of Ait Baamrane, a confederation in Morocco composed of six tribes.  They are one of the fiercest warriors of the community and were able to participate in any form of war.

It is for this reason that they adorned themselves in this particular type of headgear, as it indicated their status. The fascinating this is, these women from Ait Baamrane are the only ones who wear the headgear with horns.  No other Berber group in Morocco and North Africa wear this style of headgear even though they have similar ones.

According to one Twitter user, Sahar Amarir, a Graduate student at Harvard University, during colonial times, the Berber women from this region were not considered capable warriors by their Spanish colonisers.  However, when the men were either killed or imprisoned, the women took over their roles including shepherding.

In herding the sheep, they would not shave the wool so that they could hide bombs. Not only did this cause shortage of wool but also sheep.

They would not shave the sheeps and would let the wool grow in order to be long enough to hide the bombs they would strap to their bellies. The rumor goes that this caused a local shortage of wool made products and meat at the highest peak of tensions.

The Sidi Ifni region of Morocco was the last to fall to colonisers in 1934 after a long battle.

Many people in Morocco and the world recognise the courage of the people of Ait Baamrane, which fought off  the Spanish for a long time. They were instrumental in the series of battles in Morocco including the Ifni War of 1957. The Ait Baamrane continued fighting until they were able to liberate communities within a 5km radius of Sidi Ifni city. The city eventually became fully independent on June 30, 1969, 13 years after independence was declared in Morocco. 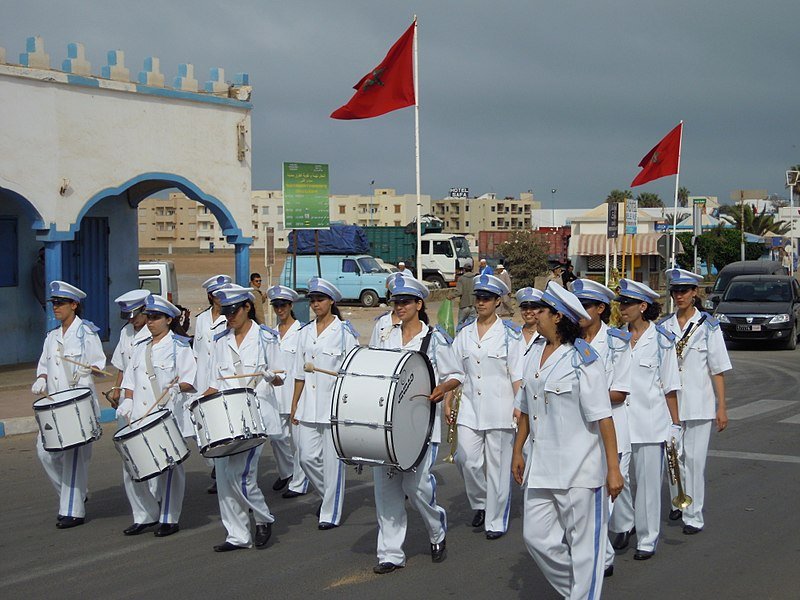 According to Cynthia Becker, an associate professor of African art at Boston University, for many women in Morocco, their clothes and jewellery were a statement. It showed their status, and married women would wear some of the most expensive and flashy jewellery, which also acted as a ‘portable bank’ that could be cashed in during financial difficulties.

While the headgear is an important signifier, not so many women of today wear it as is. They have also found a way of incorporating other styles from the region and internationally into their garb.  And according to Becker, Madonna wore one of the many versions of the modern-day dressing that includes elements from various parts of Morocco.