With nearly six decades of continuous domination, Queen of Soul Aretha Louise Franklin is celebrated worldwide for her legendary mark in the music industry and the feats she conquered as an African American artist springing up in an era where racism and marginalisation were in their peak.

There seems to be a lot about Aretha that has gone under the carpet due to her music career. To Aretha herself, music was the most crucial aspect of her life believing that she was called by God to sing.

Aside from her outstanding musical career, Aretha was also a silent activist in her own right. She was never an open civil rights activist or feminist, but many of her actions earned her much respect and proved that she had a keen interest and passion for them.

Through her music, Aretha created awareness on the civil right of African Americans, women and the marginalised in society. One of her greatest hits, “R.E.S.P.E.C.T” became a national soundtrack for these three causes especially civil rights.

Based on her abusive marriage with Ted White, many speculated that the song was demanding respect from men and for the first time, many women felt confident in demanding better treatment from men. The song also came out in 1967 at the height of the African American civil rights movement. At the time, segregation was a battle for the African American community and Aretha used her music to cross borders sending a message to the white community that the African American had a voice and were taking the equality that rightfully belonged to them.

Other songs that sent out similar messages were “Think” which chanted the word “freedom” in the bridge. Other songs included  “I say A little Prayer” and ‘My Country Ti’s of Thee” which had the line “let freedom ring’. 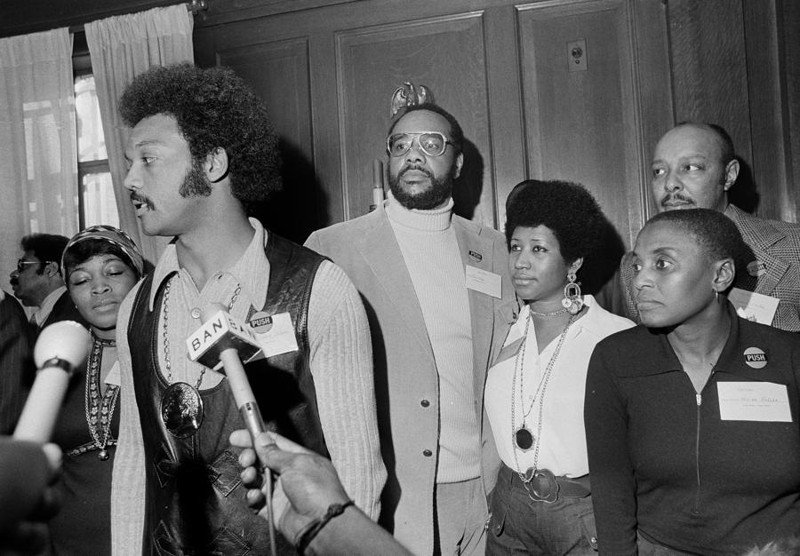 The Rev. Jesse Jackson speaks to reporters at the Operation PUSH Soul Picnic with Malcolm X; Jackson; Tom Todd,  Aretha Franklin; Miriam Makeba and Louis Stokes.-photo-Jim Wells.Aretha Franklin was also a staunch supporter of the civil rights movement and proved that one did not always have to be vocally heard to show dedication to a cause. On several occasions, Jesse Jackson confessed that their friendship became solid due to Aretha’s constant support and encouragement of the Civil Rights Movement, a cause her father had helped start.

Aretha is known to have funded the Civil Rights movements for many decades. She regularly visited friends who were arrested for the cause, sent in letters and financed affected families and was very good friends with Martin Luther King.

In 1967, as a way of supporting her friend Martin Luther King and his Christian Leadership Conference, Aretha Franklin went on tour with actors Harry Belafonte and Sidney Poitier. The conference was organised to save the ‘Soul of America’, and Aretha used the opportunity to use her music as a means of supporting the conference in the ways she knew best. The tour raised enough money to make the conference successful.

Touched by her immense contribution during the whole conference, Martin Luther King surprised Aretha and over 12,000 African Americans by presenting her with the special award from the Southern Christian Leadership Conference. It was the last time that she would see Martin L. King alive as he died two months later. 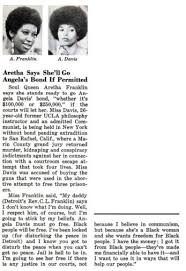 After the death of Martin Luther King, Aretha worked closely with the Black Panthers funding many of the members and the society as a whole. In 1970, Aretha encouraged women empowerment and civil rights after vocally announcing her stand with Black Power movement activist Angela Davis who was declared a “dangerous terrorist” by the then U.S. president Richard Nixon.

The FBI arrested Angela for allegedly purchasing firearms used in the 1970 takeover of the Marin County in California. Aretha stated that she was willing to pay Angela’s bail, be it $100,000 or $250, 000 but Angela was not eligible for bail. By taking this stand, Aretha put her whole career on the line for the Civil Rights Movement. After many protests and support for the societies in the civil rights movement, including Aretha Franklin, Angela was acquitted of all charges and released in 1972 after 16-months in prison.

As a social activist, Aretha was very particular about women, their sexuality and their expressiveness. She was also very passionate about seeing more women enter the entertainment scene and dominating it. Aretha was never afraid of her sexuality and often dressed how she felt.

In many interviews, she often spoke about the importance of being expressive, bold and represented in the entertainment industry. She inspired many artists such as Lauren Hill, Whitney Houston, Mary J. Blige, Beyonce and Jennifer Hudson. She believed that women and anybody could be what they wanted to be and do precisely what they wanted as long as they were comfortable. 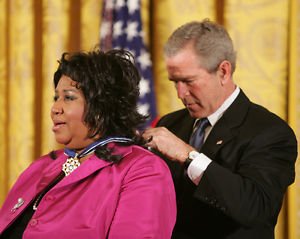 In 2009, Aretha was awarded the Presidential Medal of Freedom by President George W. Bush. The award is the highest civilian award. In his own words, Aretha was bestowed with the honour for her instrumental use of music to promote justice for all, peace and freedom.

President Bush explained that she revolutionised American music and “has captivated listeners ever since she toured with her father’s gospel revue in the 1950s. She is among our nation’s greatest musical artists and has captured the hearts of millions of Americans.”

Aretha Louise Franklin used her music as a means of speaking to the hearts of many in different ways. Despite dealing with issues such as anxiety, weight and health problems and a rumoured sex addiction, the icon was able to rise above it all and use her true calling as a musician to speak on pertinent issues still relevant in today’s societies.