The New York slave rebellion of 1741 is reported to be a large-scale scheme plotted by black slaves and poor white settlers to burn down and take over New York City.

Tension arose when the city went through periods of harsh weather, food shortages and difficult economic times, coupled with fears that the city would be attacked by Catholic countries of France and Spain after a war between Britain and Spain, which brought forth heightened anti-Catholic and anti-Spanish feelings.

The city was also worried about reports of slave revolts in other colonies.

On March 8, 1741, Fort George, the official residence of the Province’s governor, was engulfed in fire and the building burned to the ground.

About nine more fires occurred at regular intervals in subsequent weeks, creating fear and panic across the city.

Historical accounts state that a black man named Cuffee was said to be responsible for one of the fires as he was seen running from a scene of a fire incident. 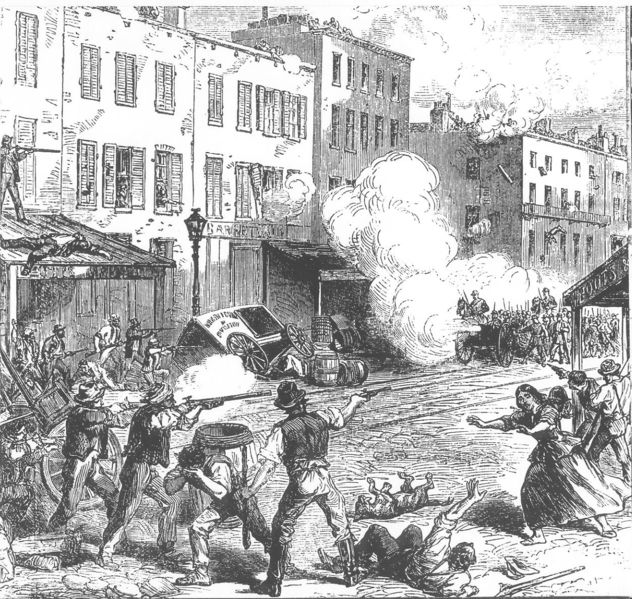 A month before these series of fires, it was reported that three slaves had robbed a small store owned by a white couple, Robert and Rebecca Hogg.

One of the slaves, Caesar, was said to have brought the stolen items to a tavern that was owned by a white cobbler named John Hughson who usually sold alcohol to slaves.

Caesar and one of his alleged accomplices, Prince, were arrested.

On April 21, 1741, when the case to investigate the fires was called, Daniel Horsmanden, a judge who was appointed to lead the investigation and preside over the robbery trials, was, according to reports, eager to uncover a plot and its perpetrators and therefore connected the fires to the burglary.

This was also because the notion of a conspiracy was gradually developing.

“Meanwhile overseas, England had been at war for the previous two years with Spain, inciting a fear of Spanish attack on New York City and a general sentiment of anti-Catholicism.

“Causing widespread suspicion was a group of black Spaniards who had been free citizens of Spain until they were captured by the British in the Caribbean and sold into slavery when they reached Manhattan in 1740.

“Harbouring resentment, the Spaniards continued to declare themselves free and that, when captured, they should have become “prisoners of war,” not slaves. Thus, Roman Catholics, African-born slaves, and Spanish-born blacks were all under suspicion,” according to an article by Encyclopaedia Britannica.

When a grand jury was empanelled for the investigation, one of the first witnesses to be examined was a young indentured servant at Hughson’s tavern named Mary Burton.

She was initially not willing to speak, but when she was threatened with confinement in jail, she gave evidence about the earlier mentioned robbery and further testified that three slaves, Caesar, Prince, and Cuffee, along with a contingent of poor white settlers, had plotted to burn the fort and the city and kill its inhabitants.

Burton also implicated a white prostitute named Peggy Kerry, who then had a relationship with one of the slaves, Caesar.

Kerry was also forced to testify and she implicated many blacks in the conspiracy. Those she named were held in custody and were also forced to provide testimony and identify others, which they did.

Caesar and Prince were subsequently charged not with conspiracy but with burglary and were hanged in May. 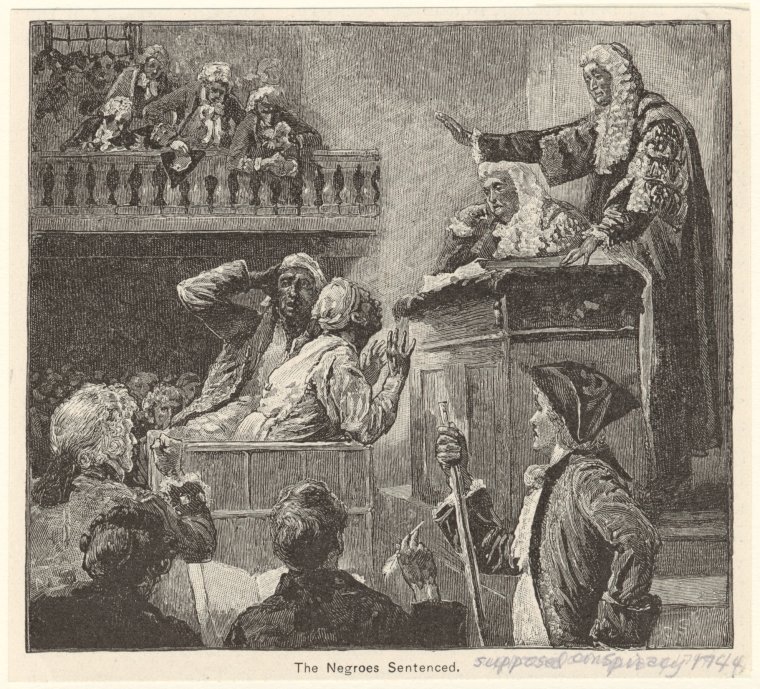 An illustration of the trial proceedings — blacknewyorkers-nypl.org

Kerry, Hughson, and his wife were also arrested and publicly executed in June. Hughson’s body, with several accounts stating that the bodies of his wife and Kerry as well, were left hanging for all to observe.

The judge, Horsmanden continued to promise rewards to anyone who would volunteer information about the said conspiracy.

Burton, meanwhile, went ahead to accuse over 20 white people throughout the summer, including a Latin teacher, John Ury who was accused of using his Catholic faith to influence the revolt.

By the end of the summer, the accusations had stopped, minimizing the panic it had caused.

At the end of the three-month investigation, accounts state that 30 blacks and 4 whites (including the Hughsons, Kerry, and Ury) were executed, and about 80 more people, mostly blacks, were exiled.

Horsmanden wrote a journal in 1744 and this served as the primary source of what transpired at proceedings of the said conspiracy.

Yet, historians like William Bryant and Sydney Gay have condemned the entire proceedings and doubt if there were any such thoughts of a conspiracy since Horsmanden’s writings could have been his own ways of justifying his actions.