Tiwa now joins a host of other international music celebrities like Rihanna, Big Sean, Fabolous, DJ Khaleed, and Emeli Sande who are affliated with Roc Nation, which was founded by African-American rapper Shawn Carter, popularly known as Jay-Z.

A statement posted Thursday, July 28, on the Roc Nation official website said: “Welcome Tiwa Savage to the Roc Nation family.” Tiwa also took to her Instagram page to share the good news with her fans and followers.

Tiwa Savage, 36, was born in Lagos, Nigeria, but she moved to London with her family when she was 11 years old. She studied Business Administration at the University of Kent and went on to bag a degree in Professional Music from the Berklee College of Music in the United States. During her time abroad, Tiwa provided backup vocals for artists like George Michael and Mary J. Blige. She also wrote music for American singers like Fantasia, Babyface, Monica, and Mya. 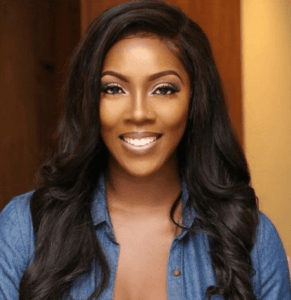 Tiwa Savage returned to Nigeria in 2010 and took the music industry by storm with the release of her debut single “Kele Kele Love,” which she followed up with several other hits like “Eminado” and “Dorubucci.” Today she is arguably the most successful Nigerian, female Afro-Pop artist of recent times.

The full details of Tiwa’s deal with Roc Nation have not been made available to the public, but insiders say her contract with Roc Nation is largely intended to see the company represent, manage, and promote her brand internationally. Tiwa remains signed to Don Jazzy’s Mavin Records, in itself a Nigerian entrepreneurship success story and one of Africa’s most powerful music label companies.

In an interview with New York’s Hot 97 Radio station, Tiwa said her deal with Roc Nation had been in the works for a while now but she wanted to make sure it was official before making it public.

“The reason why we did not really make too much noise about it is because a lot of people come over from Africa and they say they’ve got this deal and that deal, and then nothing happens. We just wanted to do it the proper way, get it official.

“I didn’t want to do that to my people. I wanted them to really believe that it was really happening, so we wanted to wait for the right time, and the time is now.”

Tiwa also assured her fans that her new music deal would not change or take away from her style of music — Afro pop — saying particularly that she loved the fact that her new management had no plans to change her.

“They really just want to bring what I already have to offer to the rest of the world, and they truly believe in the movement. So yeah, I’m really excited about it.” she said.

Tiwa’s new deal with Roc Nation could not have come at a better time, especially as she tries to move away from controversies surrounding her domestic and marital life that made the news earlier in the year. In the wake of her new Roc Nation deal, Tiwa’s music video for the new single “Bad” featuring Wizkid has been released exclusively on Jay-Z’s Tidal.