The reward for honesty, sincerity, integrity and accountability can be limitless, particularly in a society where people with such endearing virtues are very few and far between.

This has eloquently played out in the life of Josephine Ugwu, the airport cleaner who found $28,000 and other foreign currencies amounting to N12 million while carrying out her duties at the Murtala Muhammed International Airport in Lagos and returned the money to the owner, intact.

By that singular act of nobility, she became a national heroine and the toast of Africa’s most populous nation. Josephine has been superfluously showered with awards and honoured by several organizations as well as her home state of Enugu and the Federal Government of Nigeria. For the greater part 2015 and up till the early part of this year, such recognition flowed ceaselessly her way. A street was even named after her in Enugu State!

She also won the 2015 Y!/JYNaija.com Person of the Year, which is awarded to individuals who have most visibly influenced the Nigerian society for good in the past year, breaking new boundaries or consolidating on gains as well as driving the advancement of the public, especially young people.

When asked how she feels about the award, Ugwu said: “I am very happy. I am grateful to Ynaija for the award. They brought it to my place of work. It is such an honour to receive it. I say thank you to them.”

Past winners of the award include Africa’s richest man, Aliko Dangote; tech industry trailblazer, Jason Njoku; and Obiageli Ezekwesili for championing the idea of the “Office of the Citizen.” Managing Editor of YNaija.com Isime Esene, who presented the award to her, said Ugwu has through her uncommon display honesty, renewed the company’s belief in the strength of character of every Nigerian. 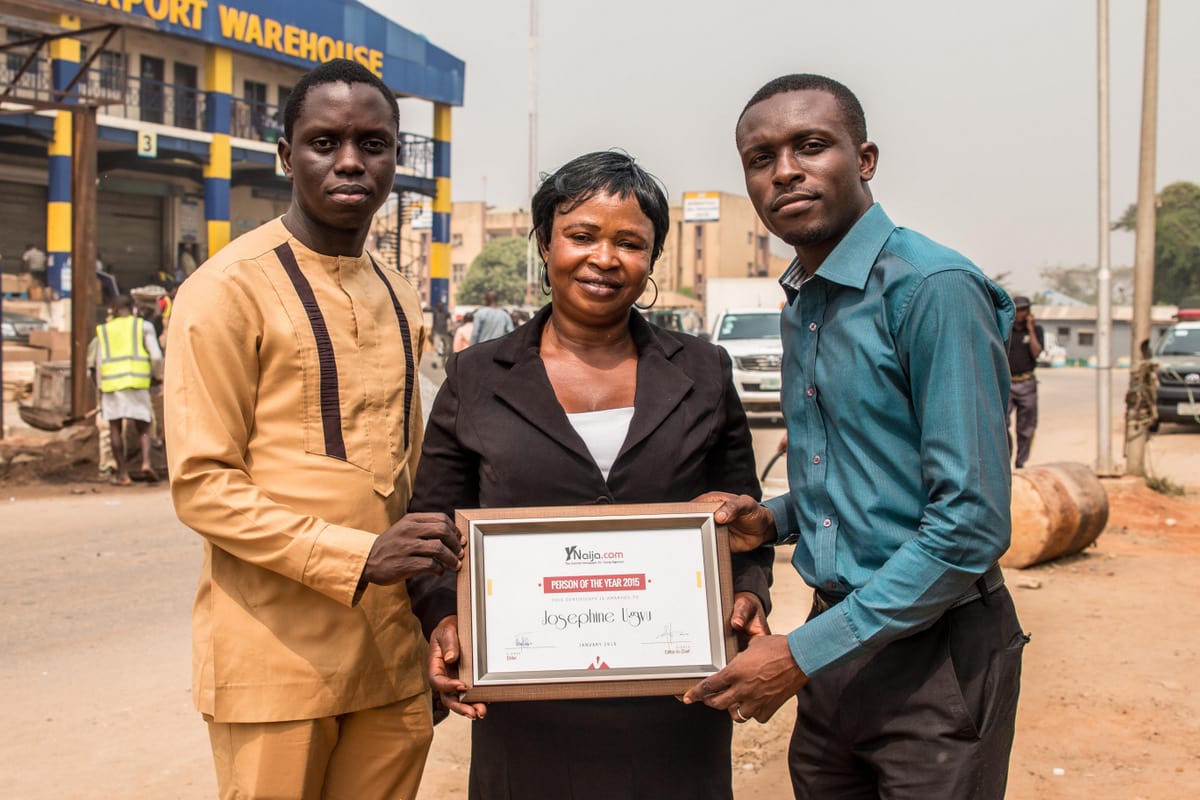 Apart from the awards, Ugwu instantly got a double pay rise from her employers, Patoviki Industrial Cleaning, a concessionaire with Federal Airports Authority of Nigeria (FAAN). The 36-year old single lady, who hails from Obokpa, Nsukka Local Government of Enugu State, South East Nigeria, subsequently got better job offers from FAAN and the Enugu State government (she later opted for the FAAN offer).

“It is true. I have an offer to work with the federal government under FAAN here in Lagos state. I am very happy about it. I thank God for the opportunity He is bringing my way to serve my country. I am also grateful to Nigerians and the government who came to my aid to reward me. I am happy, I am grateful.” ~ Josephine Ugwu

Her new job is in FAAN’s commercial department, where she is charged with the responsibility of collecting money for flight landing. “Good things have been happening to me. I thank God for His goodness and mercies over my life,” she said.

While speaking in a recent interview with one of Nigeria’s leading soft-sell magazine, Encomium, the cleaner-turned-celebrity said she wants Nigerians, especially parents, to teach their children good virtues, adding that the inculcation of moral values starts from home and a how a child is brought up.

“We should also have the fear of God and love one another. The very first money I saw and returned was not from my duty post, but I still went ahead to pick it and returned it. We also need to love our nation.
“One man can make a difference in this nation. I was abused and called all sorts of names when I returned the money. Does it mean that those who abused me would have made away with the money if they had found it? That is how corruption starts. We should learn how to act right even when you are not rewarded,” she further advised.

On the issue of when she intends to marry, Ugwu said she will get married when the right man comes her way, adding that most guys roving around her are not serious as they seem to be after her money. “You know men are sly. Some think I have money but it is not so. I cannot rush into it. It is better to wait till I get the right person. I want to be careful,” she further explained.