The International Criminal Court (ICC) in the Hague, Netherlands, heard harrowing accounts Tuesday of how Ugandan Lord’s Resistance Army (LRA) rebel Dominic Ongwen allegedly raped and recruited young children in to the militia group. In her submissions before the judges at the start of the trial, ICC Chief Prosecutor Fatou Bensouda described how Ongwen reportedly raped one of his victims both vaginally and anally while threatening to kill her with a dagger in order to keep her quiet.

“After the rape, Ongwen and everyone around her considered this witness to be his wife. She could not escape,” Bensouda narrated.

Bensouda also described how the accused recruited children who were as young as 6 years old, adding that these children were so young that the muzzles of their AK-47 rifles dragged along the ground when hanging on their shoulders.

The prosecution played clips from intercepted radio traffic, in which an LRA rebel identified as Ongwen confessed to slaughtering a group of civilians.

Ongwen is facing seven counts of crimes against humanity, including murder, enslavement, inhumane acts of inflicting serious bodily injury and suffering, cruel treatment of civilians, intentionally directing an attack against a civilian population, rape, and pillaging.

If found guilty of these crimes, the 35-year-old rebel will most-likely receive a life sentence.

In his response, Ongwen, who insists that he was also a victim of the LRA leader Joseph Kony, pleaded not guilty to all charges.

Ongwen was indicted by the ICC in 2005, alongside Kony, who is still at large, and three other LRA leaders, to answer to charges of war crimes and crimes against humanity committed by the LRA since 1987.

Of the five senior LRA commanders indicted by the ICC, only Ongwen and Kony are still alive. 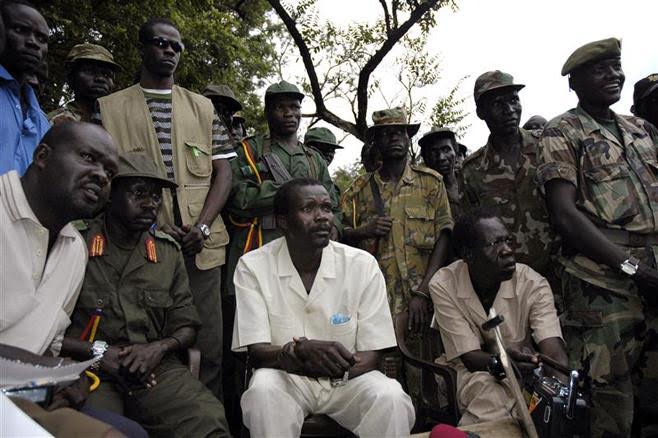 The LRA is a militia group and heterodox Christian cult operating in northern Uganda, South Sudan, the Central African Republic, and the Democratic Republic of Congo.

Originally the group was known as the United Holy Salvation Army and the Ugandan Christian Army and was established to push for a multi-party democracy in Uganda and ensure the country was ruled according to the 10 Commandments as stipulated in the Bible.

The LRA is not motivated by any recognizable political agenda as it largely functions as a personality cult directed by Kony, a self-proclaimed prophet whose leadership has earned him the nickname “Africa’s David Koresh.”

Since the mid-1990s, the LRA was strengthened by alleged military support from the government of Sudan that was retaliating against the Ugandan government’s alleged support for rebels in what would later become South Sudan.

In retaliation, the LRA attacked refugee camps in northern Uganda as well as southern Sudan, brutally killing hundreds of civilians. 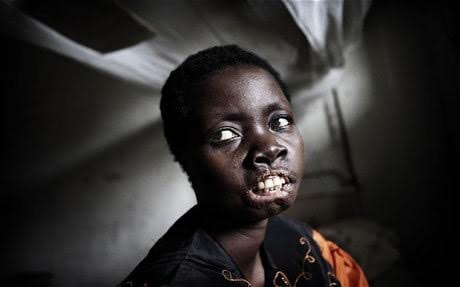 A young mother of four, Marie Mboligele was attacked by the LRA near her village in Democratic Republic of Congo in March 2010. The rebels cut off her lips and ear and abandoned her. Photo credit: Telegraph U.K./Marcus Bleasdale/VII

Auma Consolata was abducted by the LRA when she was 17 years old. She now lives in northern Uganda. Photo credit: Getty Images

The group reportedly abducts both children and adults to serve as soldiers, with girls serving as sex slaves to its commanders. To deter them from escaping, the rebel group infamously mutilates its victims by cutting off their lips, noses, hands, feet, breasts, and ears.

The LRA also uses these brutal tactics to cause panic among civilians and to deter them from cooperating with the government.

It is estimated that the LRA has so far killed more than 30,000 people and abducted more than 25,000 children.

Several joint operations between government forces from Uganda, South Sudan, and DR Congo have managed to kill thousands of LRA fighters and disperse others to neighboring countries, such as the Congo, Sudan, and the Central African Republic.

Still, the remnants continue to launch occasional attacks on civilians in countries where they have fled.

Learn more about the Lord Resistance Army in the following video: