It was everything African but Africa in the latest Marvel film that awakens imaginations of what the black continent ought to have been with its infinite resources.

The $200 million make-believe will hit the conscience of every thinking African and will tickle their fancy with the introduction of African fashion, languages, traditions and an array of impossibilities typical of an African mythology.

The nation of Wakanda

This is not just a science fiction movie, but one that awakens the spirits of black people across borders and continents, not only for its predominantly black cast, black producers, and director Ryan Coogler, but for its challenge of the status quo.

These were received with cheers and applause by the ankara and dashiki-wearing audience during the pre-screening in Ghana’s Silverbird Cinemas at the Accra Mall on February 15, 2018, ahead of the February 16 global premiere.

The curiosity to see the much-awaited Afrofuturistic movie was evident in the protest against the late start and piercing music from the hallway promoting another movie showing in the next cinema hall. The worries were nipped in the bud when the movie started with the typical African storytelling tradition. 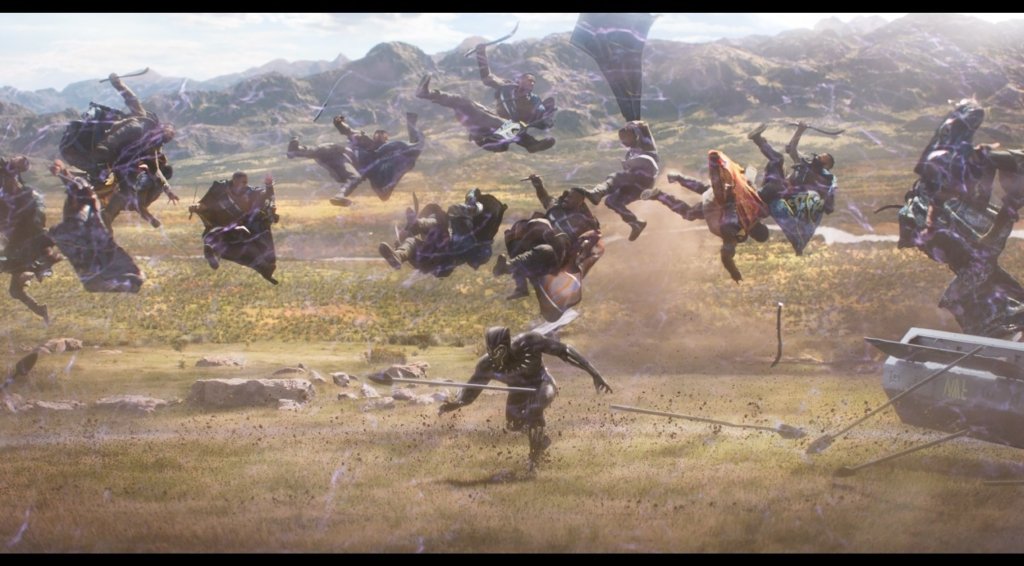 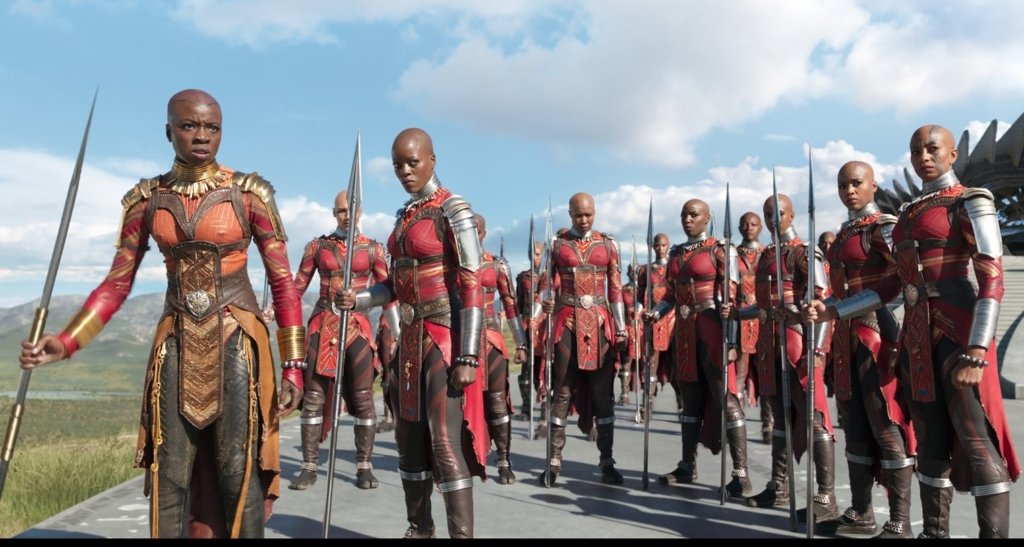 The thrills and intricacies in the movie overshadowed the dark projection of the film in the 300-seat cinema that could have offered a cinematic experience if it were in the fictional East African nation of Wakanda – home to Black Panther – which first appeared in the Marvel comic Fantastic Four #52 created by Stan Lee in 1966. 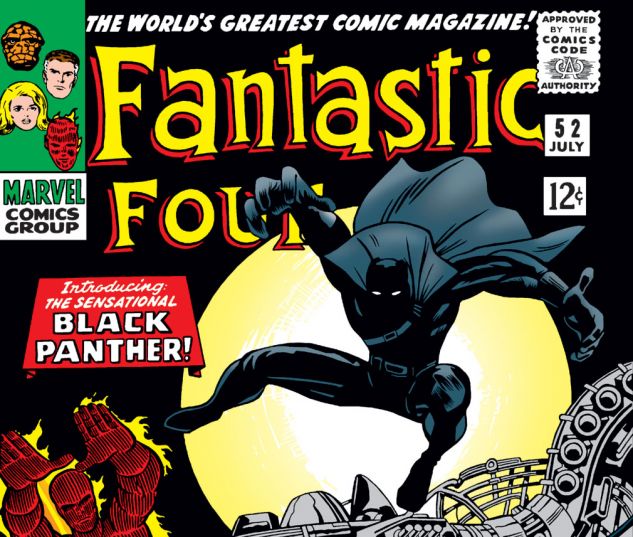 Africa is divided by countries with diverse cultures and traditions but Black Panther attempted to fuse them in Wakanda where there were tribes and a paramountcy which is succeeded by the bravest royal.

The black superhero character and the storyline were beyond expectation as Black Panther/ T’Challa (Chadwick Boseman) was protected by a woman – Okoye (Danai Gurira) – the General of the all-female Dora Milaje army that breaks stereotypes and represents several historical accounts of real all-female armies in Africa. 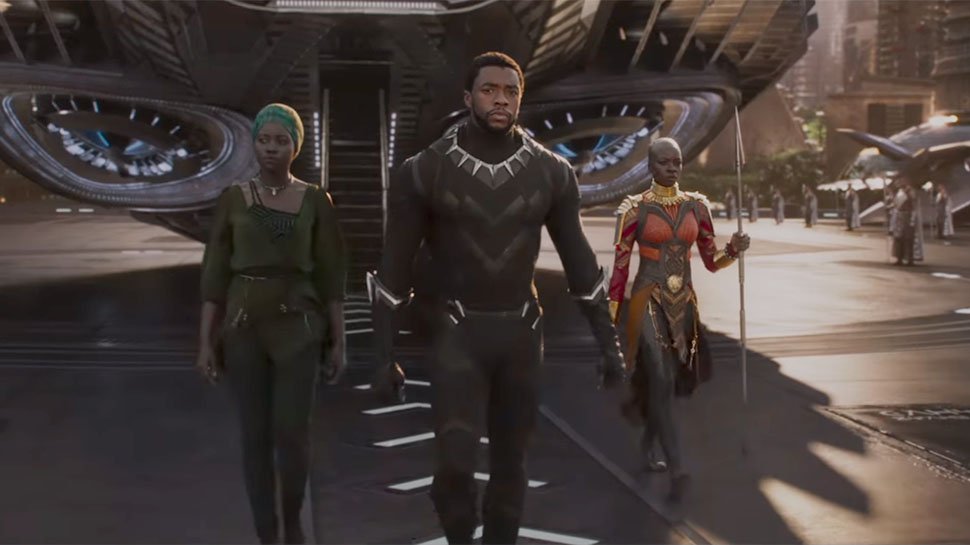 The introduction of Nakia (Lupita Nyong’o), Black Panther’s ex-girlfriend was unconventional but iconic as she helps free some Hausa-speaking girls kidnapped by a militant group led by Bambadjan Bamba in Nigeria’s notorious Sambisa forest that serves as the headquarters of Boko Haram. This is a reminder of the plight of the over a hundred Chibok girls who are still in captivity.

Child soldiers were also spared in the one-woman operation which was interfered by the unwanted help of Black Panther. These are near-effortless feats the world will wish for as the issues of the abduction of children and child abuse in conflict is rife especially by Boko Haram in Nigeria and rebel groups in South Sudan.

As a cliched third-world country that does not accept aid and is self-sufficient, Wakanda puts real African countries to the test as its fictional vibranium-based technological advancement questions the wrong decisions by African leaders who continued the colonial ferrying of raw materials to develop Europe and America in return for aid to feed the impoverished masses. 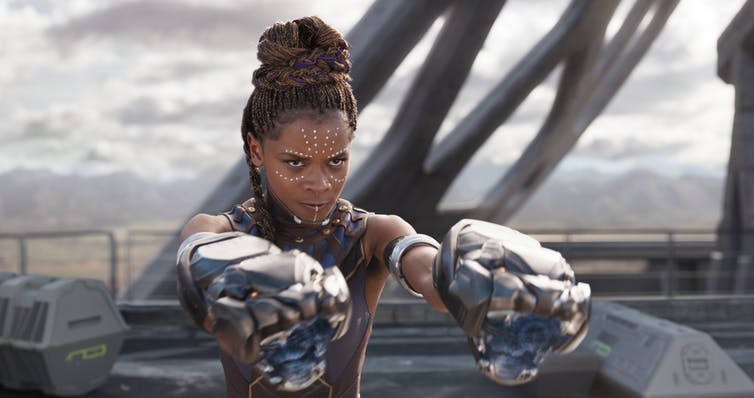 Enough of the fiction which could be realized if the continent had recovered from the effects of colonization and had united politically and economically to develop in unison. “We let the fear of our discovery stop us from doing what’s right,” says Black Panther who inherited the rich Wakanda kingdom from his father who was killed in a bombing at the United Nations building while giving a speech in a suit.

The African connection to the United States was also established after a royal Wakandan travelled to Oakland where he had a son, former black-ops soldier Erik “Killmonger” Stevens (Michael B. Jordan), who returned home to violently take the crown from T’Challa as vengeance for his father who was killed by his own brother, the former King. 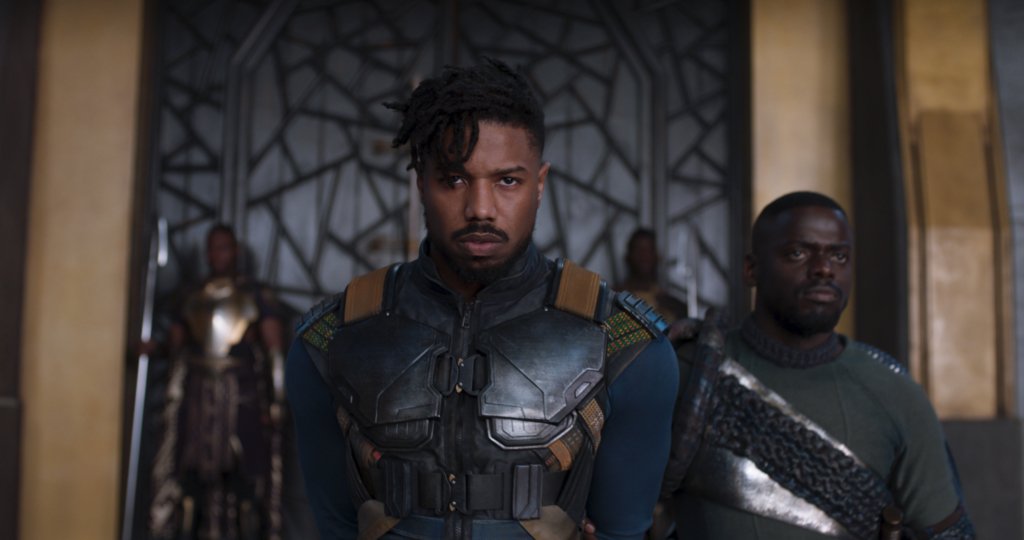 Killmonger, the surprise villain changed the whole narrative after killing the white antagonist with a South African accent Ulysses Klaue (Andy Serkis). This characterizes the Akan proverb that translates: If an insect will bite you, then it’s from your cloth. [No more spoilers]. 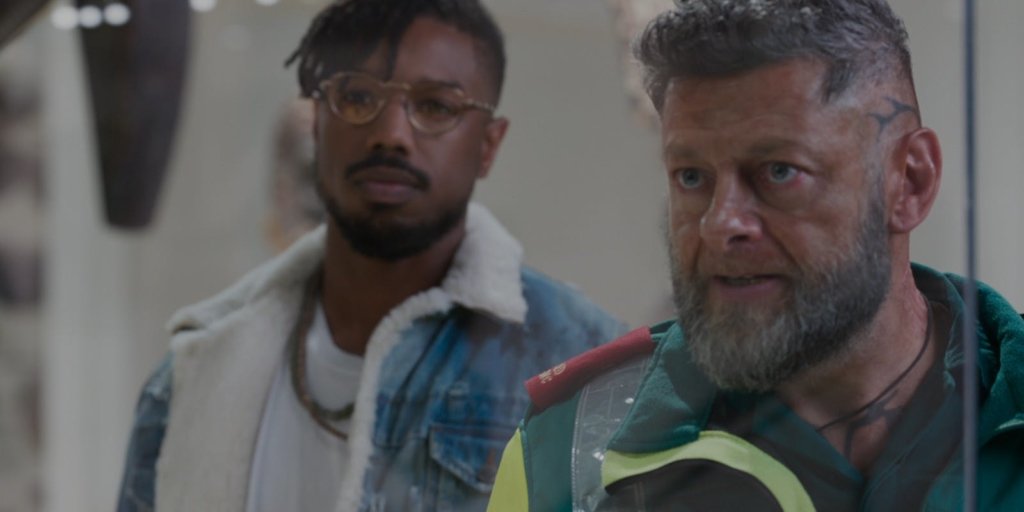 The African customary representation in the film includes the patrilineal succession system which was adulterated with the fight-to-the-death challenge for the throne. The priest; coronation rituals; some of the clothes including the Ghanaian Kente, Basotho blankets; Adinkra designs; and traditional wrestling were as real as expected.

Comedy was an integral part of the film with a comic relief from almost all the major stars including tribal leader M’Baku (Winston Duke), T’Challa and Nakia. For the civil war over the throne, there is a lot to think about especially the ironic involvement of the white CIA agent who supported the protagonist in the fight against the villain who had support from some of the tribes. 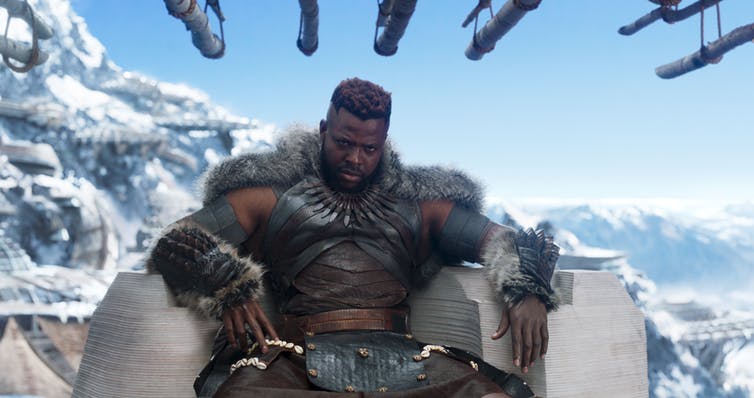 It gets better with Wakanda’s resolve to change the world starting with black children in the United States via an outreach programme in Oakland – Afrocentric fantasy.

I leave you with the final words of the African American villain who thought he could change Wakanda for the better by ruling the world: “Bury me with my ancestors who died in the ocean. They knew death was better than bondage.”

Like his father, T’Challa visits the United Nations with Okoye, Nakia, and Ayo (Florence Kasumba) to offer Wakanda’s resources in secret resources in building the world. He tells the doubtful delegates: “Fools build barriers. The wise build bridges.” 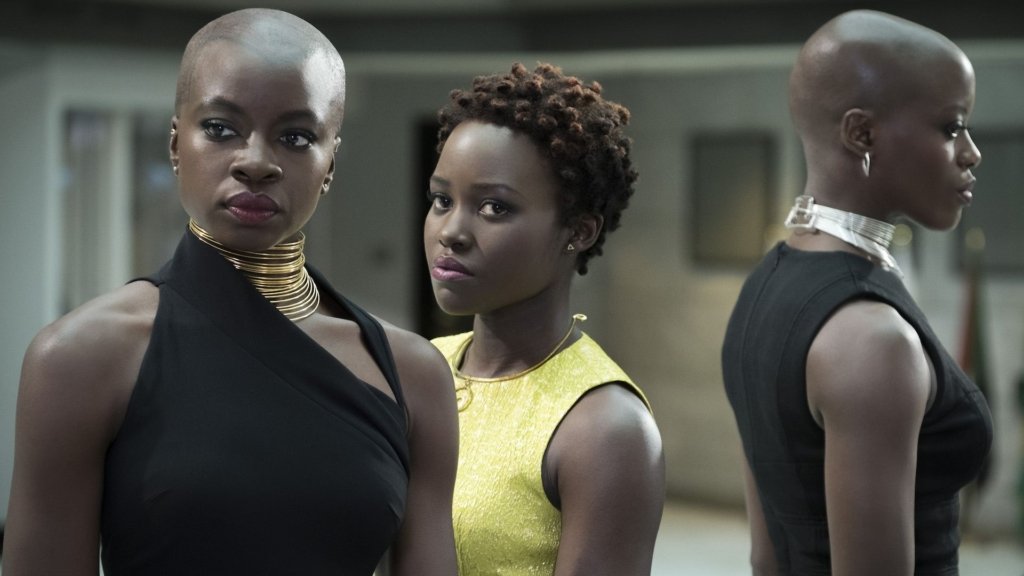 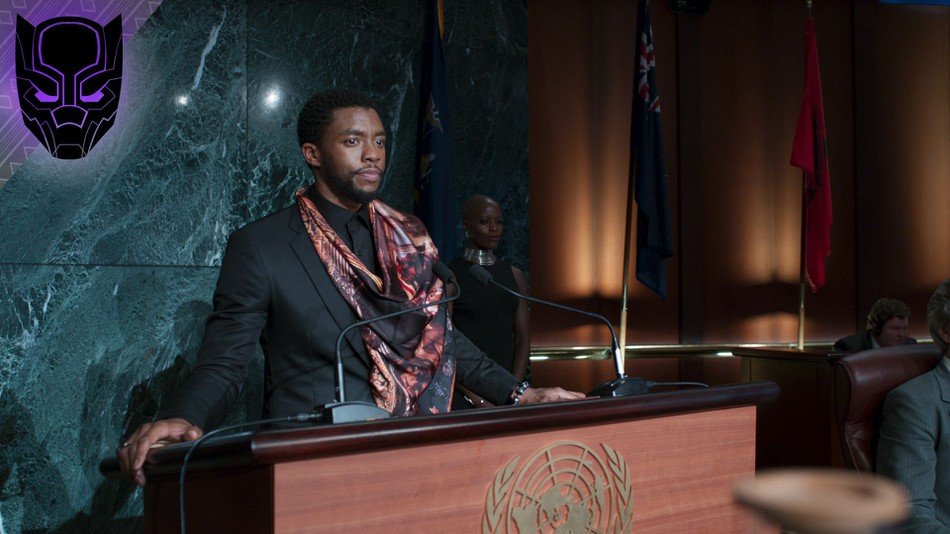