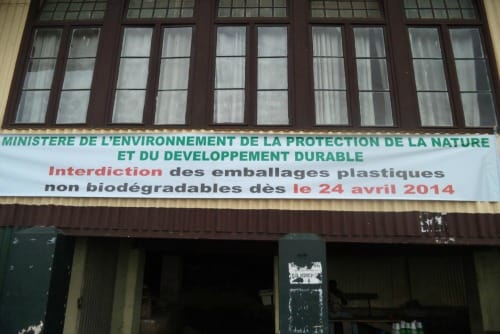 Cameroon (Face2FaceAfrica) – Cameroon President Paul Biya, through the Ministry of Environment, Protection of Nature, and Sustainable Development, has issued a ban on the use of non-biodegradable plastics bags. The ban is going to take effect on April 24th throughout the nation.

In 2012, the Ministry of Environment, Protection of Nature, and Sustainable Development Pierre Hele issued a Ministerial Decision on the ban.

Therefore since the beginning of this year, the government has been promoting several campaigns and tours to different localities of the republic, aiming at sensitizing the population on the disadvantages of using plastic packaging.

‘’The change that the government is putting in place is not going to be easy for the people to adhere to since they have been use to plastic bags, but I believe it is going to be possible,’’ Miss Mary Ekane, South West Regional Chief of Service for Sustainable Development, told Face2Face Africa.

Hele is heading campaign teams to the different regional headquarters of the republic, targeting manufacturers, vendors, importers, distributors, and companies that are involved in the production and sale of plastic bags.

Several local vendors and users of plastic bags have been expressing anxiety about what they will use as a replacement. Some of them told Face2FaceAfrica that ‘’we are aware that plastic bags are going to leave the markets, but we do not know what is going to replace them.’’

Another vendor also explained that ‘’for now, I don’t know what to do.’’

The government of has taken measures to ensure that the new law on the ban is respected by all. “Heavy sanctions and fines will be meted out on defaulters, ranging from thousands to millions of Central Africa Francs.’’ Miss Ekane explained again. She further explained that “in the economic capital of Douala, there are several companies already producing biodegradable bags, which will soon go in to circulation.’’

To make sure that everyone should understand the change, the government is working hand-in-hand with some NGOs to help in sensitizing the masses on the issue, while businessmen have been encouraged to declare their stock for control.

As from April 24, control teams from both the ministry and delegations will be sent to the field to check and ensure that the ban is respected by all.

Concluding her chat with Face2FaceAfrica, Miss Ekane said, “The ban on the use of non-biodegradable plastic packaging has worked so well in countries like Uganda and Rwanda and many others, so, why not in Cameroon.’’

SEE ALSO: South African Student Dies After Being Beaten By Teacher in Class