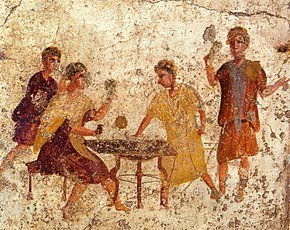 Image of the Saturnalia Festival…Face2Face Africa

As far back as the ancient Roman days, slavery existed and followed the same trend as the transatlantic slave trade.

Slaves were the property of their masters and subject to capital punishment, severe house chores and farm work as well as sexual exploitation.

In turn, masters wore slave clothes, ate slave food, performed all the domestic and farm work that was given to the slaves and lived in the quarters.