On Tuesday, August 23, 241 Nigerian immigrants returned from Libya to Nigeria of their own volition. Their repatriation was facilitated by the International Organization for Migration (IOM), the Libyan government, and the Nigerian embassy in Libya.

The Daily Trust newspaper reports that all 241 migrants arrived at Murtala Muhammed International Airport in Lagos aboard a Libyan Airlines Airbus A330-200 chartered flight. They were received on arrival by officials of the IOM office in Nigeria, immigration officials, and the National Agency Against Trafficking in Persons (NAPTIP).

Speaking to reporters at the airport in Libya, IOM Nigerian office director Nahashon Thou explained the returnees had not been deported but had chosen to return to Nigeria. Such persons are known as Assisted Voluntary Returnees (AVRs). 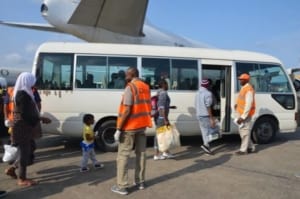 Thou said further that each of the returnees will be given the sum of N15,000 (about $50) to help them find their way back to their various states of origin or to their next destinations. A number of them will also receive financial assistance to learn a trade or start a small business as they seek to find their feet and reintegrate themselves into society.

Nigerian immigration officials stated that the returnees were mostly between 15 and 25 years old, and were comprised of 174 males and 67 females including 5 children.