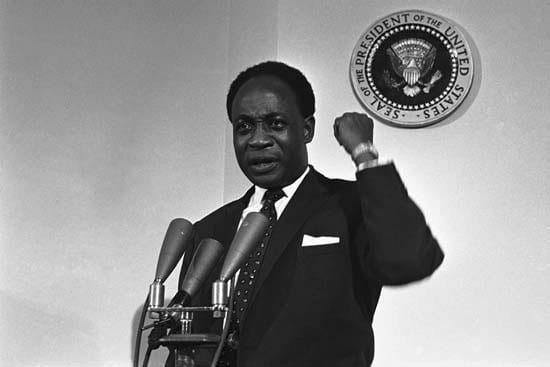 A strong believer in Pan-Africanism, Kwame Nkrumah was a founding member of the Organization of African Unity (OAU) and the first President of Ghana. He was born in September 1909 in Nkroful, Gold Coast (now Ghana), where he spent most of his childhood in the bush and on the nearby sea.

Nkrumah joined politics in the early 1930s after graduating from Achimota – a government training college in the capital Accra. At the time, he was working as the headmaster of Axim, a Catholic primary school in Elmina. He would later spend 12 years abroad pursuing higher education and developing his political ideologies.

Upon his return to Gold Coast in the 1940s, Nkrumah formed the convention People’s Party, which negotiated the independence of the West African nation. He was appointed Prime Minister in 1952, a position he retained until 1960 when he became President. Ghana gained independence from Britain in 1952.