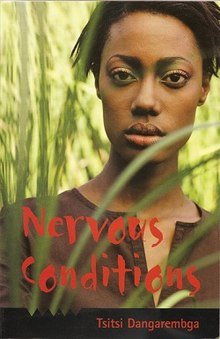 Nervous Conditions is a semi-autobiographical novel that focuses on the story of a Shona family in post-colonial Rhodesia, now Zimbabwe, during the 1960s. The title is a reference to Jean Paul Sartre’s introduction to Frantz Fanon’s 1963 book The Wretched of the Earth. Sartre writes, “the status of ‘native’ is a nervous condition introduced and maintained by the settler among the colonized people with their consent.” Dangarembga takes Fanon’s exploration of African people oppressed by a colonial regime and expands this narrative to consider the specific experiences of black women and how that gender compounds the oppression they face.

Nervous Conditions has received many awards and is often cited as a critical tenent of African feminist and postcolonial literature. The book was awarded the Commonwealth Writers’ Prize in 1989. The Bloomsbury Review, called it an “absorbing page-turner”, the African Times said, “another example of a bold new national literature”, and Booklist reviewed, “a unique and valuable book”.