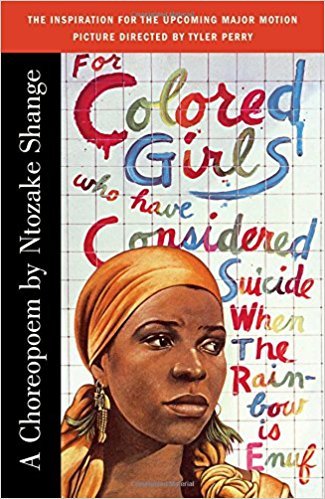 Shange’s ‘choreopoem’, as she calls it, consists of a series of poetic monologues to be accompanied with dance and music. For Colored Girls… explores the stories of seven African American women and their double-edged plight in a racist and sexist society. As Shange writes, to “being alive and being a woman is all I got, but being colored is a metaphysical dilemma I haven’t conquered yet”.

Shange first performed her choreopoem in 1974 with four other artists at a women’s bar outside Berkeley, California. She took the play to Broadway in 1976, the second play by a black woman to reach Broadway after Lorraine Hansberry’s A Raisin in the Sun in 1959.

The choreopoem has been performed Off-Broadway and on Broadway, adapted as a book, a television film, and in the highly acclaimed theatrical film produced and directed by Tyler Perry. Shage’s 1976 Broadway production was also nominated for the Tony Award for Best Play.