In Africa, most female victims of homicide are killed by their intimate partners (former or current spouse or romantic partner) and family members, a damning report by a United Nations agency has revealed.

The report by the United Nations Office on Drugs and Crime (UNODC) noted that in 2017, 87,000 women were killed around the world and 50,000 (or 58 per cent) died at the hands of intimate partners or family members.

Released on the International Day for the Elimination of Violence against Women, the report used available data of gender-related killing of women and girls, focusing on murders committed by an intimate partner or family members.

“While the vast majority of homicide victims are men, women continue to pay the highest price as a result of gender inequality, discrimination and negative stereotypes.  They are also the most likely to be killed by intimate partners and family,” said the organisation’s Executive Director Yury Fedotov.

According to the report, Africa alone had 19000 women who were victims of intimate partner violence in 2017, which makes the continent the second worldwide after Asia.

However, the continent leads in terms of the number of women who run the greatest risk of being killed by their intimate partner or family members with a homicide rate of 3.1 per 100,000 female population. 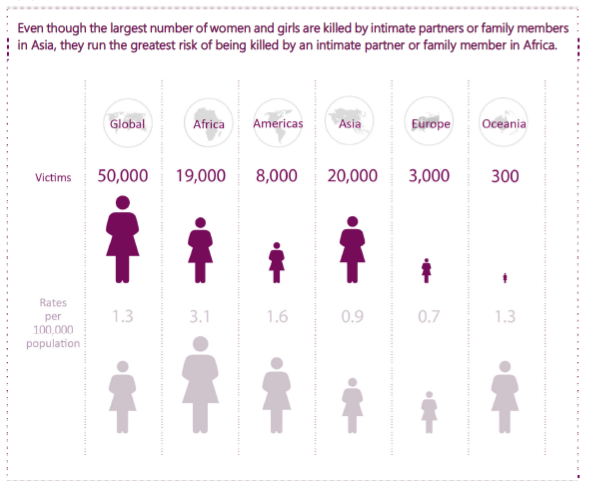 The report further added that although men are still the leading victims of general homicide, women face the burden of intimate partner and family-related homicide.

“Many of the victims of “femicide” are killed by their current and former partners, but they are also killed by fathers, brothers, mothers, sisters and other family members because of their role and status as women,” the report added.

African countries have made headlines over domestic violence.  In South Africa, the brutal murder of Karabo Mokoena by her boyfriend, Sandile Mantsoe elicited continental and international outrage. In Kenya, a governor was charged with the murder of a pregnant student who had wanted to expose their love affair.  In Uganda, at least 30 women have been kidnapped and killed since 2017, causing a mass outcry in the country. In some other African countries, honour killings, which involve the murder of women and girls who are seen to ‘deviate from culture’ or shame their families, are still rampant.

The report places the blame on gender norms where men are seen as more authoritative.

“Intimate partner violence against women and girls is rooted in widely-accepted gender norms about men’s authority within society in general and the family in particular, and men’s use of violence to exert control over women.”

It also highlights that intimate-partner violence is prevalent in heterosexual relationships.

When it comes to gender-based homicide in armed conflict, the report highlights that the killings are almost always accompanied or preceded by sexual violence, kidnapping and enslavement.

In most of the data collected, the motivations behind the homicides are jealousy, fear of abandonment, battered women and severe mental illness. In the report, the most common very few perpetrators show empathy or remorse after the act.

About half of the men who had killed their intimate partner showed no empathy towards the victim and about a third expressed no remorse. Some refused to acknowledge the repeated acts of physical violence that took place during the homicide incident and claimed that the woman had simply fallen on the knife, or that the perpetrator had not realized that he had grabbed the victim’s throat with such force that she died of suffocation.

Although quite a number of these countries have laws in place to combat violence against women, these incidents are not always reported until a homicide has occurred.

Over the years, women have taken to the streets to protest the increasing cases of violence against women and femicide but most countries have been a bit slow in dealing with these cases.