African women are making strides in the field of medicine and surgery despite the challenges of unequal pay, lack of visibility and support as well as little respectful treatment. In South Africa, many women have broken some of these barriers and have achieved incredible feats in a field that is male-dominated to inspire and save lives every day.

One of these women is Dr Lindiwe Sidali, who has just made history as the first African female cardiothoracic surgeon in the country. The journey for the “small town girl”, born and raised in the Eastern Cape has not been easy, she said.

“I became aware that I was an African female in a speciality that is famously known for being a male-dominated and I learnt to embrace who I am and what I represent.

“It’s been challenging but it’s also been a great adventure, and I could not have done it without the support of the amazing people that I had by my side,” said the 35-year-old who has been a doctor for 10 years.

From tending cattle to support her family, Sidali matriculated from Rakgatla High School in Wonderkop, North West and subsequently received a bursary from the North West Department of Health to study medicine in Cuba.

What sparked her interest in medicine, and particularly in heart-related matters, was the encouragement she received from her parents and other relations.

“I was encouraged by my family and my teachers. Between 2000- 2001, I decided to volunteer at a Wonderkop clinic to see if I would like it. The nurses were wonderful in encouraging me to pursue medicine. That’s how I actually heard about the Cuban scholarship programme, so I applied and got accepted.”

“But what has kept my interest and made me stay in medicine is the desire to serve my people, to want to help people and also to give back not only by treating patients but to be a positive role model for every African child. Cardiothoracic surgery happened by chance to me.

“I had always been interested in most surgical disciplines, and could not decide what to pursue. But then interesting enough, every time I was on call as a community service /medical officer, there was almost always a patient with a stabbed heart, or chest related trauma and after seeing a heart beating on my hands, I knew that I didn’t want to do anything else but cardiothoracic surgery,” she said in an interview with KwaZulu-Natal Department of Health. 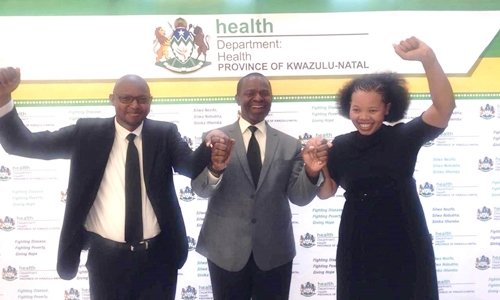 Sidali believes that there has been a rise of female doctors in surgical disciplines overall but she stressed that the figures could be more if African women are given the same opportunities as compared to their counterparts.

“We need opportunities and exposure. But the most important thing that is needed to change the future for all African children is the eradication of poverty. And one of the ways to do that is through education. That is how you truly liberate a person. But education needs money, which is why education has to be free for those who are from disadvantaged backgrounds. We also need more positive role models for young women. African girls need to see a girl that looks like them making it in the world and in that way they can see that it can be done,” said Sidali, who loves to write romantic fiction stories.

“I write under a pseudo name (only my friends know it’s me). I intend to share my writing with the world someday, but no one will ever know it’s me.”

Her wish now is for South Africans to adopt a healthy lifestyle to avoid heart-related ailments.

“Eating healthily and exercising can prevent a lot of heart diseases. It would also help a great deal if people could present to a health care facility as soon as possible with any symptom. Regular screening and testing can help a great deal in this regard.”

Sidali is just one of the many South African women who has beaten the odds to achieve success in the medical and surgical fields. In May 2017, Dr Ncumisa Jilata became Africa’s youngest neurosurgeon following her Fellowship graduation in Durban at the age of 29.

Its institutions are also achieving great feats. This October, a South African hospital, Wits Donald Gordon Medical Centre became the first in the world to transplant a liver from an HIV-positive donor to an HIV-negative child.

South Africa has previously chalked successes in transplants between people with HIV but what made this operation different is the fact that it is the first liver donation from a living HIV-positive donor in the country as previous donors were deceased.

It is also the first liver transplant from an infected donor to an HIV-negative recipient, with the aim to reduce transmission in the recipient. This shows that living HIV-positive patients can safely donate organs, and this is a relief for South Africa that has a severe shortage of organ donors.

Being one of the African countries with a high rate of HIV, the surgery implies that those affected can also provide more transplants to save lives.

This was the second time South Africa made a major surgical feat after doctors of the Stellenbosch University (SU) and the Tygerberg Academic Hospital in Cape Town performed the world’s first penis transplant in 2014.

The same team performed the world’s third surgery in 2017 on a 40-year-old recipient who was reported to have lost his penis 17 years ago due to complications after traditional circumcision.