Women’s health is an especially big concern in Sub-Saharan Africa, and safe pregnancy and abortion top the list as one of many women’s most pressing health concern.

According to the UNICEF, global maternal mortality ratio declined by 44 per cent between 1990 to 2015 but it remains unacceptably high in sub-Saharan Africa. The region accounted for 62% (179 000) of global maternity-related deaths in 2013. One of the major complications that account for nearly 75% of all maternal deaths is unsafe abortions (WHO).

Now a report by BBC has placed Ghana and Nigeria at the top of abortion pill searches in the world, fueling concerns about what is going on with safe pregnancy in those two countries and the region. 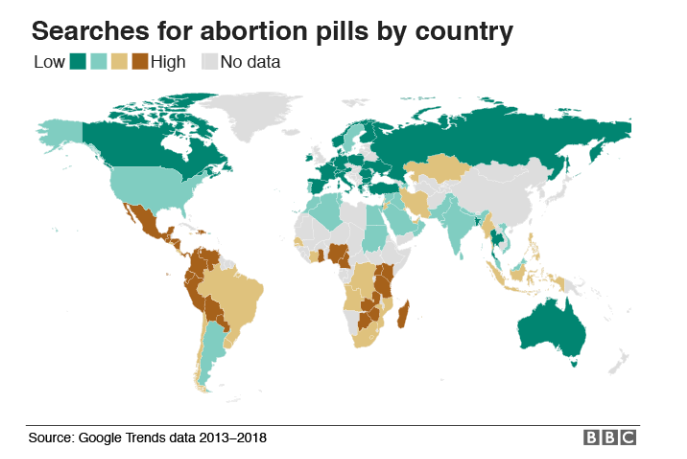 BBC Report on abortion pill searches on google in 2018

BBC has found that Ghana and Nigeria are the two countries with the highest search interest in Misoprostol. BBC used data from google search results to arrive at this conclusion.

Misoprostol and its sister, Mifeprostone, are usually combined to medically induce a miscarriage. Misoprostol can also go by brand names like Cytotec.

Women in countries such as the UK are usually prescribed the combination by a doctor but women appear to be searching for and purchasing the pills online in countries where access to abortion is restricted, often breaking the law, risking severe punishments. 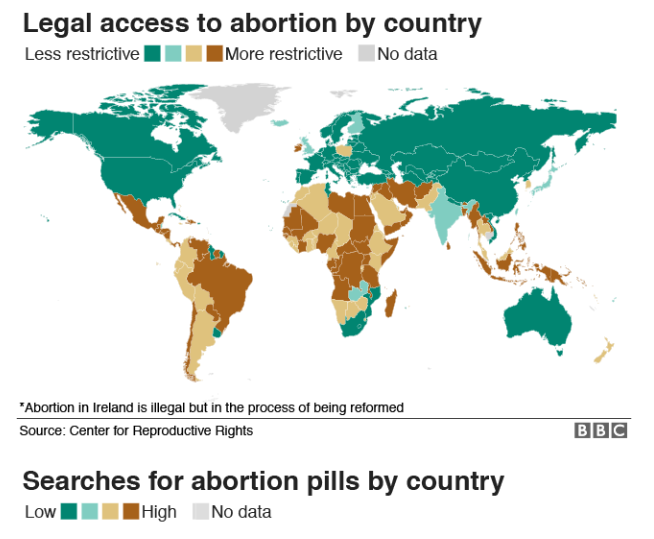 BBC Report on global searches on abortion pills in 2018

As of 1985, Ghanaian law permits abortion in cases of rape, incest or the “defilement of a female idiot;” if the life or health of the woman is in danger; or if there is risk of fetal abnormality.

The country’s Health Service and the Ministry of Health also established and adopted protocols for the provision of safe abortion services in 2006. Still, the Guttmacher Institute notes that as of 2007, only “a mere 3% of pregnant women and only 6% of those seeking an abortion were aware of the legal status of abortion”. Almost half (45%) of abortions in Ghana remain unsafe.

Abortion laws are even stricter in Nigeria.

Abortion in the country is only legal when performed to save a woman’s life. According to the Guttmacher Institute, abortions in Nigeria are “still common, and most are unsafe because they are done clandestinely, by unskilled providers or both”. Nigeria has one of the highest maternal mortality ratios in the world, and little improvement has occurred in recent years. 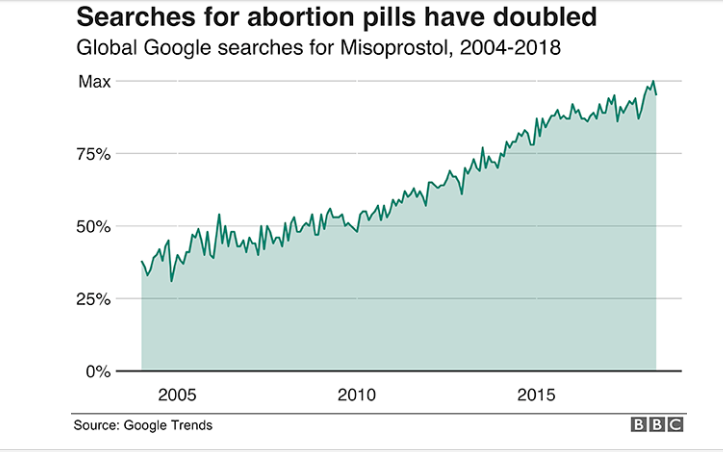 It is important to note that search results for abortion pills have increased globally.

Although medical professionals say Misoprostol is normally considered a safe method of abortion when administered by a medical professional, it poses risks when used by an untrained person. The World Health Organisation says this “less safe” option accounts for almost one-third (31%) of the total number of abortions, both safe and unsafe.

Dhammika Perera, the global medical director at Marie Stopes International, explained, “even when the quality of the drugs is perfect and you follow the protocol to the letter, there is still a failure rate.

“When a woman buys the pills online, or is provided them by an untrained person, it increases the chances of a failed abortion.

“These women are also less likely to go for post-abortion care if something goes wrong.

“Stigma, cost, geographical access can all make women hesitate and that puts them at risk.”

The World Health Organisation says about 25 million unsafe abortions take place each year. This accounts for 45% of all abortions.