Have you ever seen a Black man or woman with blue eyes? What was your initial reaction? I almost fainted when I saw one about 25 years ago while trekking home from school. My first thought was, This must be a Mami Water (mermaid), since the person was not an albino. It was scary to look at from afar, but when I moved closer, the lady looked so pretty and interesting.

This experience is not totally different from the reaction of certain Nigerian parents that gave birth to a blonde hair/blue eyed baby girl in London some years back. When the husband saw the baby, he was shocked.  If it wasn’t that he trusted his wife so much, their marriage could have become history — at least until a DNA test verified the paternity of the baby.

Today, many believe that those with blue eyes or other non-brown eyes are not of African descent, and if they are, they must be wearing colored contact lenses. There are other fears that have been expressed when it comes to people with blue eyes.

Generally, however, contrary to the opinion of many people, having blue eyes is not the exclusive preserve of Asians or Europeans; Black Africans can also have blue eyes, and there are many explanations for this. 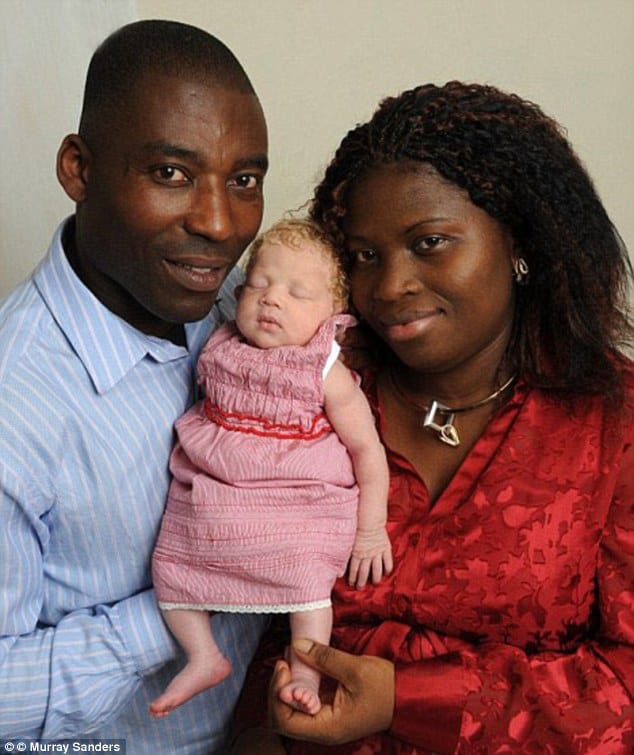 Nigerian parents who gave birth to a White baby in 2010

First, one can have blue eyes as a result of a genetic mutation. As explained by livescience.com, “a single mutation which arose as recently as 6,000 to 10,000 years ago was responsible for all the blue eyed people alive on Earth today.”

This was a revelation by a team of researchers from Copenhagen University. The team, whose research is published in the Journal of Human Genetics, identified a single mutation in a gene called “OCA2,” which arose by chance somewhere around the northwest coast of the Black Sea in one single individual about 8,000 years ago.

Blue eyes also come about when a person of African ancestry has Caucasian relatives on both sides of the family who are carriers of the gene for that particular eye color.

Apart from genetic mutation, blue eyes can also be caused by Waardenburg Syndrome, a deficiency inherited from a single parent who may display similar characteristics. There are different types of Waardenburg Syndrome, but essentially, it is a rare disease characterized by sensorinuerial deafness in association with pigmentary anomalies and defects of neutral-crest-derived tissues.

Some have also suggested that blue eyes are a result of ancient interbreeding with the Neanderthals, who went into extinction about 25,000 years ago. Another theory suggested in Afritorial, states that blond hair and blue eyes arose because of a mechanism called “sex selection,” where males and females choose their mates based on one unusual physical characteristic that is not necessarily associated with fitness. 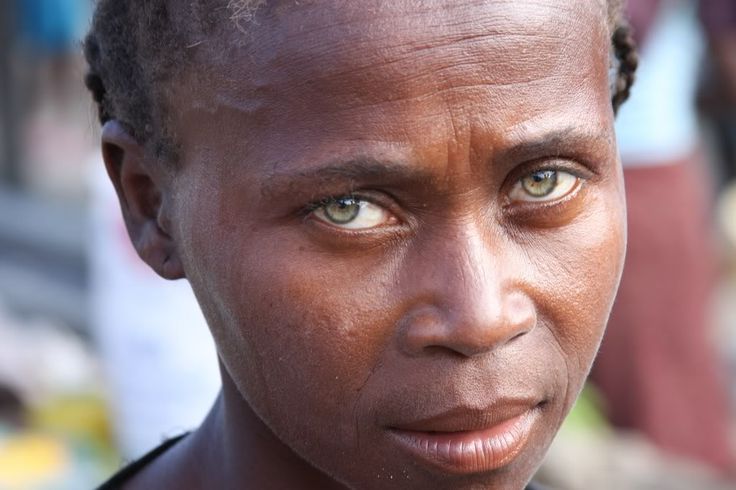 An African woman with hazel eyes

It is noteworthy to note, however, that having blue eyes is not diabolic or evil and the only way to know if someone has natural or artificial blue eyes is to ask the person.

There are a lot of notable Black celebrities with natural eye colors other than black or brown, including Rihanna, Tyra Banks, Vanessa Williams, and more. Evidence of blue-eyed Africans also abounds throughout Africa, including South Sudan, South Africa, Nigeria, Uganda, and more.

Let’s hear from you. Have you have seen a Black African with blue eyes before?