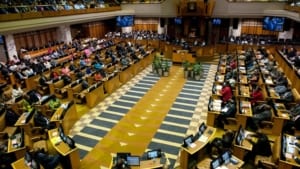 With an average monthly salary of $16,243, South Africa’s federal lawmakers are the highest paid in all of Africa and rank among the best paid in the world.

There are 400 elected National Assembly members and 90 National Council of Province Members. This translates to a monthly wage bill of about $7.8 million or $94 million per year.

But that is not all, South African MPs also receive a number of benefits including accommodation and travel allowance, ICT allowance and a fully equipped office.