Cameroon’s 85-year-old president Paul Biya wins another election, securing him a seventh term in office and the title of Africa’s oldest president.

The result announced on Monday by the president of the Constitutional Council, Clement Atangana, declared Biya winner of the October 7 election with 71% of the vote, while his challenger, Maurice Kamto, garnered 14% of the vote.

Atangana also announced that the election was free, fair and credible. A declaration that contrasts the sentiments of the opposition that contested the election which was marred by a low turnout and intimidation by the military in the English-speaking regions.

18 petitions were filed by several opposition parties to cancel the election on the basis of recorded election irregularities and disenfranchisement of some English-speaking voters in favour of the ruling Cameroon People’s Democratic Movement (CPDM).

Maurice Kamto of the Cameroon Renaissance Movement (CRM), who earlier declared himself the winner of the election could not defeat the Octagenarian who he had served in the past as a minister.

Paul Biya has been in office since November 6, 1982, and he is set to stay for another seven years which means he will be 92 years old during the next election. The president spends most of his time in Switzerland where he is on constant watch by doctors due to his ill health.

How did Biya get into office?

Cameroon’s first president Ahmadou Ahidjo led the country to independence in 1960. He succeeded in joining the southern half of the former British Cameroons with the larger French-speaking Cameroon and ensured the equitable distribution of resources to the various ethnic groups in the country.

He brought in Paul Biya as prime minister when the former British Trusteeship Territory, West Cameroon, became part of the unified country. 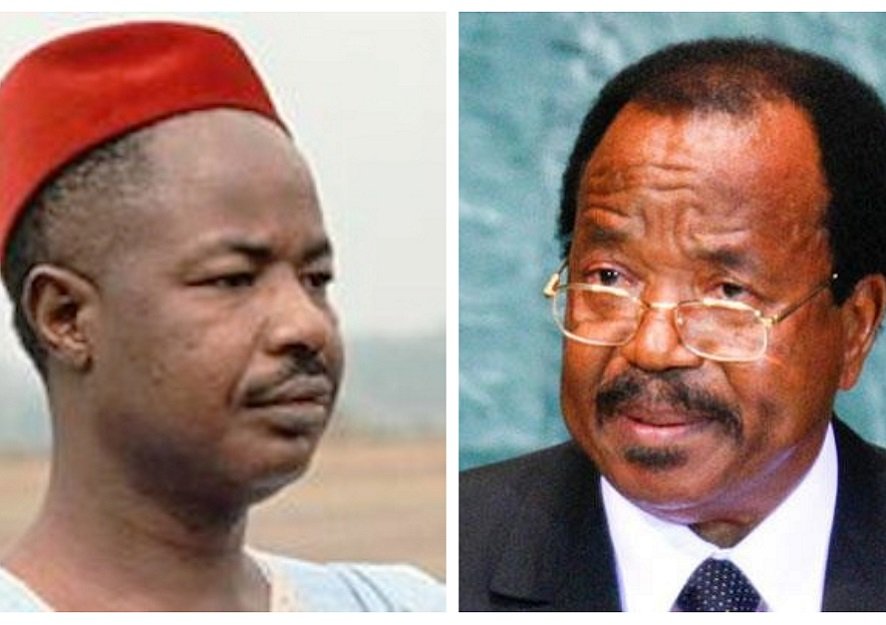 However, he suffered ill health and decided to resign for the good of the country and to rest power in the prime minister until he gains his health. On November 4, 1982, Ahidjo resigned and put in his place the Christian southerner, then-Prime Minister Paul Biya.

Ahidjo also resigned as leader of the ruling Cameroon National Union (CNU) party and arranged for Biya to become the vice president and be in charge of affairs while he was away.

On July 19, 1983, while Ahidjo was in France, Biya began removing Ahidjo’s supporters from the various positions they held in government and destroyed symbols of his authority, replacing Ahidjo’s portraits with his own and removing Ahidjo’s name from the anthem of the CNU.

What incensed Ahidjo the most was Biya’s June 18 Cabinet reshuffle which he felt was “designed to provoke an open crisis.”

Then on August 22, Biya announced that he had uncovered a plot to destabilize the state and institutions, and this allegedly involved Ahidjo.

Ahidjo described the coup announcement as one being manipulated by authorities, who, instead of “taking care of the economic and social situation which was deteriorating glaringly in Cameroon”, wanted to divert attention.

He later resigned as head of the ruling party on August 27, and Biya took over the next month. Ahidjo and his allies who allegedly plotted the August 22 coup were judged and sentenced. Biya commuted their death sentences, including that of Ahidjo, to life imprisonment following international pressure.

During this period, several foreign leaders urged the two to reconcile their differences but this did not materialize and Biya, in April 1984, accused Ahidjo again of another attempted coup, a claim Ahidjo denied.

Ahidjo never returned to Cameroon, dividing his time between residences in Senegal and the south of France. He died of a heart attack in Dakar on November 30, 1989, and was buried there.

Several appeals to Biya for the return of the body of Ahidjo for a befitting burial in Cameroon have fallen on deaf ears as he has stated in October 2007 that the matter of returning his predecessor’s remains was a “family affair” and none of his business.

Paul Biya has remained president since he took over power and the former British Trusteeship Territory of West Cameroon has protested against marginalization and unfair treatment by the government which, in turn, uses the military to silence them.