Abba was convicted on charges, including failing to report acts of terrorism to authorities, according to Reuters.

Prosecutors said evidence found on Abba’s computer showed that he had been in contact with Nigerian-based Boko Haram Islamist militants and that they had communicated information to him about future attacks.

Judge Edou Mewoutou also ordered Abba, who works for Radio France International (RFI), to pay a fine of 55 million CFA Francs ($90,000) and barred him from speaking to the media about the trial.

The VOA reports that Abba was arrested in northern Cameroon in July 2015, where he was reporting for the RFI Hausa service on the Boko Haram conflict. He was then charged with complicity in terrorism and failing to denounce acts of terror on Cameroon’s anti-terrorism law passed the year before.

Denying all charges, Abba told the court during the trial that he obtained the videos, photos, and information found on him as part of his reporting from several social media platforms, including YouTube and Facebook.

Before his conviction on Monday, Abba had spent 633 days in detention.

Military prosecutors had initially pressed for the maximum death penalty but then changed it to life imprisonment last week. 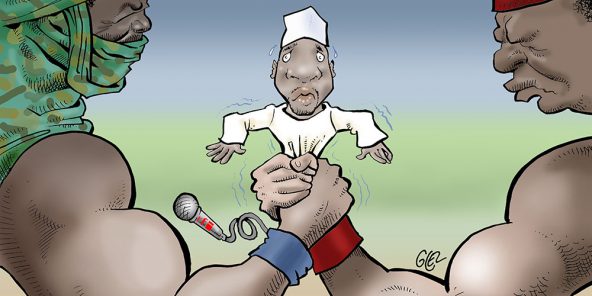 Abba’s lawyer, Clement Nakong, said his client was innocent of the charges and he would appeal the ruling.

Abba’s conviction has drawn sharp criticism and condemnation from activists and rights groups, with Amnesty International’s Illaria Allegrozzi describing it as “unfair” and flawed.

“Ahmed Abba’s conviction, after torture and an unfair trial, is clear evidence that Cameroon’s military courts are not competent to try civilians and should not have jurisdiction in these cases,” Allegrozzi said.

Angela Quintal of the Committee to Protect Journalists added, “Ahmed Abba should never have been detained, prosecuted, and convicted for his journalism – let alone ordered to spend a decade behind bars.”

In August, the Nigerian army declared Ahmad Salkida, a freelance journalist who had written extensively about the activities of the Boko Haram sect, wanted for his alleged connection and sympathies to the dreaded militant group.