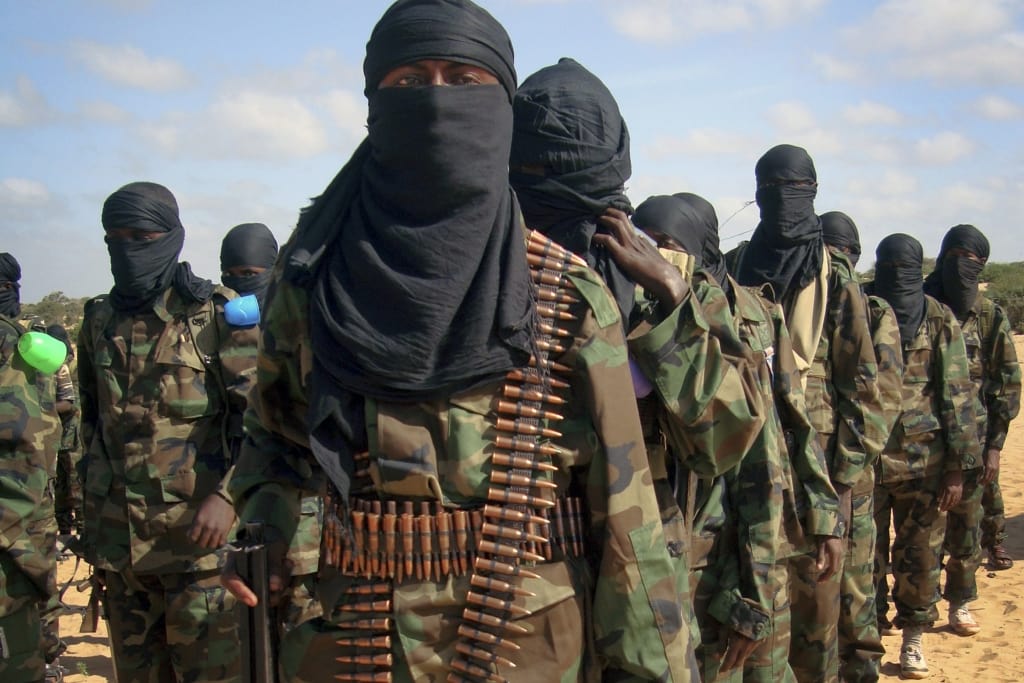 Armed members of the militant group al-Shabab attend a rally on the outskirts of Mogadishu, Somalia Monday, Feb. 13, 2012. Thousands of Somalis gathered at a militant-organized demonstration on the outskirts of Mogadishu on Monday in support of the merger of the Somali militant group al-Shabab with al-Qaida, which was announced last week by al-Qaida leader Ayman al-Zawahri. (AP Photo)

Islamic militant group al-Shabab was attacked Wednesday by foreign commandos in Awdhegele, Somalia, according to Reuters.

Awdhegele is located about 30 miles west of Mogadishu, Somalia’s capital.

Al-Shabab Spokesman Sheikh Abdiasis Abu Musab confirmed that the helicopter raid occurred at one of the insurgent’s military bases.

“They were masked and spoke foreign languages, which our fighters could not understand. We do not know who they were, but we foiled them,” Musab said.

Awdhegele resident Abdikarim Nure spoke to the current state of the base post-attack, saying, “The fighters were patrolling the area this morning, and people are not allowed to go close to the area.”

This is not the first time Al-Shabab has been targeted by foreign fighters.

In 2013, not too long after the Westgate Shopping Mall attack in Kenya, where 67 were killed and 175 were wounded, a group of nearly 20 U.S. navy Seals — responsible for killing Osama bin Laden in Pakistan in 2011 — attacked an al-Shabab beach house in Barawe, south of Mogadishu, to capture senior al-Shabab commander Abdulkadir Mohamed Abdulkadir.

And while the Seals ultimately retreated after losing the element of surprise when a militant spotted their advancement, U.S. Defense Secretary Chuck Hagel said of the operation, “These operations in Libya and Somalia send a strong message to the world that the United States will spare no effort to hold terrorists accountable, no matter where they hide or how long they evade justice.”