Seventeen football fans have died, following a stampede at a football stadium in the town of Uige in northern Angola.

A football league game on Friday between local side Recreativo do Libolo and Santa Rita de Cassia ended in a tragedy when hundreds of supporters seeking to gain entry overwhelmed the stadium gates.

“There was a blockage at the entrance to the January 4 stadium…this obstruction caused multiple fatalities and there are 56 injured in the hospital,” police spokesman Orlando Bernardo told the AFP. The medical director at the local hospital say five of the injured remain in a critical condition. 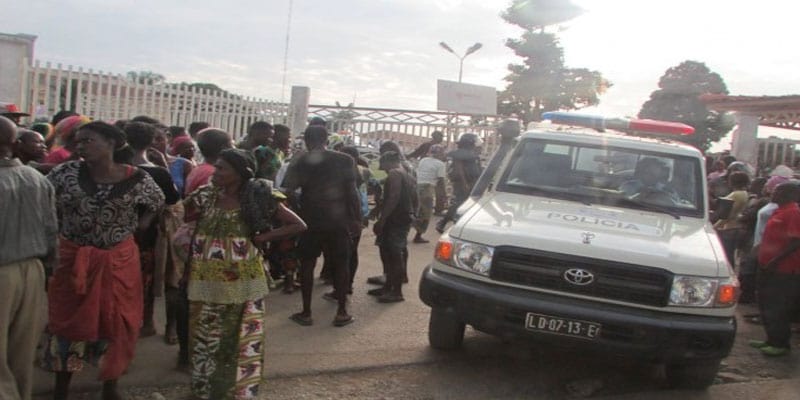 Police say most of the dead were trampled or suffocated after they were pushed to the ground. Photo credit: Standardmedia

Witnesses say the 8,000-seater stadium was already filled past capacity as crowds of eager supporters with match tickets continued to pour in to the venue.

Police say most of the dead — which include several children — were trampled or suffocated after they were pushed to the ground.

In a statement posted on its website, Recreativo do Libolo club said:

While the players were on the field, outside fans were trying to get into the stadium and a gate probably gave way to the pressure of the crowd causing several people to fall who were literally trampled on by the crowd.

The club further described the accident as a tragedy without precedent in the history of Angolan football.

According to Al Jazeera, though, Angolan football matches do in fact have a history of stampedes and deaths; the stampedes are often caused by overcrowded stadiums, with crowd violence also one of the reoccurring problems at matches.

Reports in local media say Angola President Jose Eduardo dos Santos has expressed condolences to the families of the victims and ordered an investigation in to circumstances surrounding the unfortunate incident.