On May 25, 1986, Uganda’s Alice Auma supposedly went “insane”.  She was taken to 11 witch doctors after losing her ability to hear or speak.  She then disappeared into the Paraa National Park.

Born in 1956, Auma was a flour and fish merchant. Others speculate she was a prostitute.

She was an aunt to the leader of the Lord’s Resistance Army (LRA), Joseph Kony.

After being married twice without any children, Auma returned to her hometown, Opit, Uganda.  At some point, she became a practising Catholic. 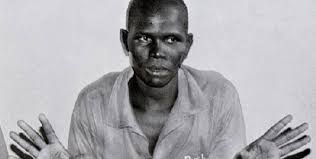 In 1985, Auma was afflicted with mental illness. Her father, Severino Lukoya took her to numerous witch doctors for help but her condition only worsened, according to The Observer.

It was believed that Auma was possessed by the spirit of deceased Italian army officer named Lakwena. The name means ‘messenger’ in the Acholi language.

Auma then went into the Paraa National Park. Some say she travelled to Murchison Falls National Park. Either way, she emerged 40 days later with a new identity: Alice Lakwena, a psychic and spiritual healer.

It is said that during her disappearance, she communicated with other spirits on how to liberate the Acholi people from the political powers.

Lakwena’s mission was to lead an uprising with the Acholi people against the Museveni regime, which had displaced them from their lands and forced them to live in camps.

She was also the leader of the Holy Spirit Movement (HSM), which eventually had 15,000 members. Under her guidance, the Acholi were to abstain from drinking alcohol, smoking and arguing; remain chaste; cease witchcraft and stop committing any sins. These sacrifices were for the betterment of Uganda as a whole. 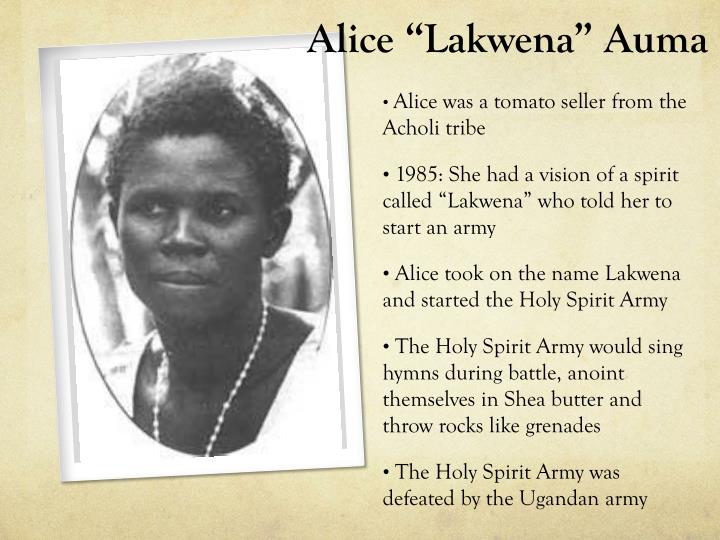 “She promised that the bullets of the government soldiers would have no effect upon them if they lived a life of spiritual purity and anointed themselves with water and oil – that the stones they would use against the enemy would turn into grenades, and explode. She promised they would be victorious and cleanse Uganda of its sinful ways, and turn it to God.”

The Lakwena soldiers were also required to tend to Lakwena when she was ill; soldiers also had blessed oil applied on them, “supposedly making them bulletproof, as long as their souls were pure,”  as documented by the International Museum of Women. 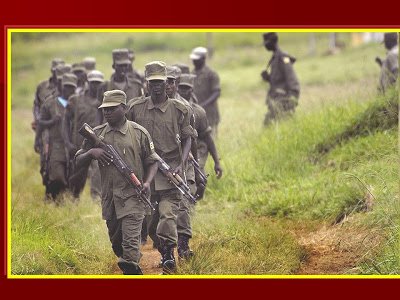 Lakwena along with the HSM attacked the National Resistance Army (NRA) gaining many wins in their pursuit for a better Uganda.

In January 1987, the Lakwena fighters along with another group dubbed UPDA ambushed the NRA in Kilak. One thousand, six hundred Lakwena fighters and UPDA members died during that battle. More others died later in the year  at another fight at Magamaga in Jinja – an industrial town in eastern Uganda.

After this fight,  Auma claimed that the of Lakwena had left her.

Auma ended up at the Ifo refugee camp near Dadaab in northern Kenya. She would remain there for the rest of her life.

In 2004 she was suspected of running a child trafficking ring from Gulu to Dabaab.  In 2006, Auma claimed to have discovered the cure for HIV/AIDS.

On January 17 2007, Auma died after a week-long illness believed to have been caused by complications from HIV/AIDS.

HSM was then taken over by Kony, who then transformed it into the United Holy Salvation Army then the Ugandan Christian Army and finally to Lord’s Resistance Army in 1992.  Just like his aunt, Kony started off as a spirit medium but later turned into one of the most brutal warlords in Africa.

Although infamous when alive, Lakwena was buried in the presence of a handful of people at her home two weeks after her death.