Addressing department employees and speaking on the importance of working hard to create a better future, Carson, the former John Hopkins Hospital head of Child Neurosurgery, drew largely from his own life experiences in his 40-minute speech that lauded the so-called “American Dream.”

“That’s what America is about, a land of dreams and opportunity.

Carson’s remarks quickly drew the ire of prominent voices within the African-American community and sparked outrage on social media, with many describing his comments as careless and racially insensitive.

The Anne Frank Center for Mutual Respect Director Steven Goldstein said, “This is as offensive a remark as it gets,” pointing out that African slaves didn’t choose to come to the United States nor were they given their rights to freedom for hundreds of years.

Comedian and activist Whoopi Goldberg hinted that Carson probably knew nothing about the history of Black slavery in America and urged him to watch the iconic “Roots” written by Alex Haley:

Ben Carson..please read or watch Roots, most immigrants come here VOLUNTARILY,cant’t really say the same about the slaves..they were stolen

And award-winning actor/producer Samuel L. Jackson was less forgiving, reacting on Twitter with an expletive-ridden outburst:

In its response to the backlash, the Department of Housing and Urban Development maintained that a line from Carson’s speech had been taken out of context:

This is the most cynical interpretation of the secretary’s remarks to an army of welcoming HUD employees. No one honestly believes he equates voluntary immigration with involuntary servitude, a spokesman for the department said. 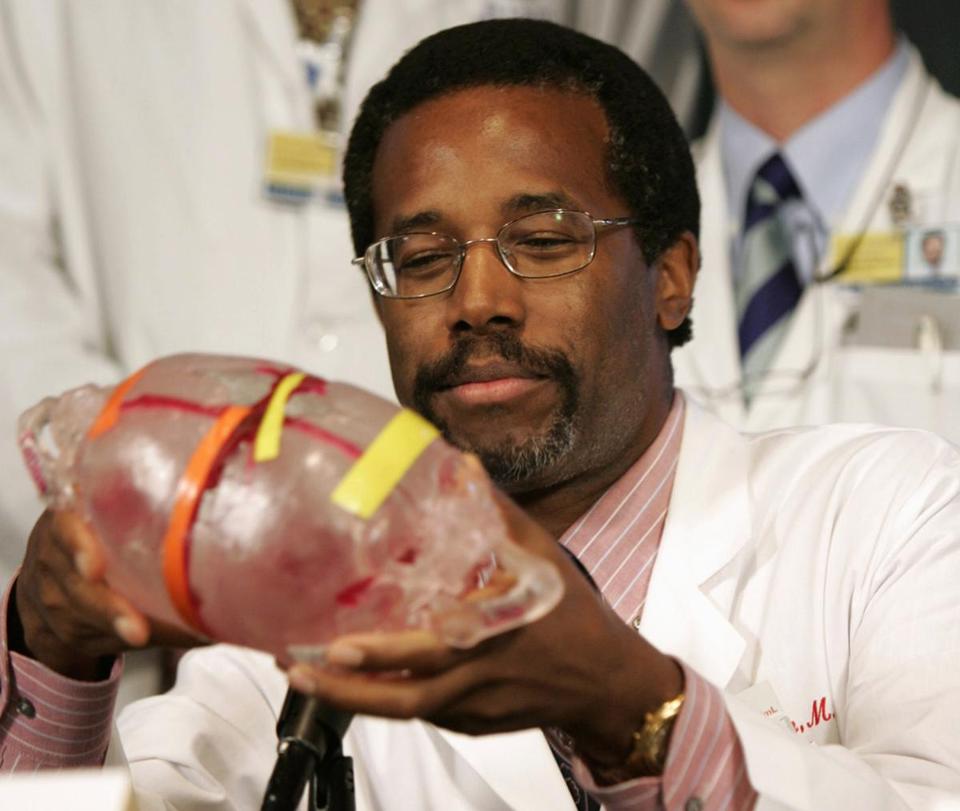 Dr. Ben Carson held a model of the heads of conjoined twins during a 2004 press conference. Photo credit: AP

Carson’s inspiring life story of how he went from mediocrity to graduating top of his class is a best-seller popular with African Americans and millions of Africans around the world.

His crowning achievement as the first Black neurosurgeon to successfully separate a pair of Siamese twins co-joined at the head, earned him cult status in the African-American community.

However, in more recent times, Carson’s actions and statements — often ignorant and bizarre — have continued to alienate him from Black and other minority communities.

In 2013, Carson described the Affordable Health Care Act, then-U.S. President Barack Obama‘s signature healthcare law that extended much-needed health coverage to millions who were previously uninsured, as the worst thing that happened to the United States since slavery.

Carson has also been quoted by conservative news sites, such as Brietbart, as saying, “Abortion was the No. 1 cause of death in the African-American community,” which is inaccurate, but he is yet to speak on the hundreds of African Americans that die annually from police violence or the often subpar and discriminatory healthcare treatment African Americans receive that has had a dramatic impact on the life expectancy of African Americans.

In a 2015 statement, he likened President Obama to a psychopath and dismissed the work of activists clamoring for equal rights for American women saying, “There is no war on women in this country.”