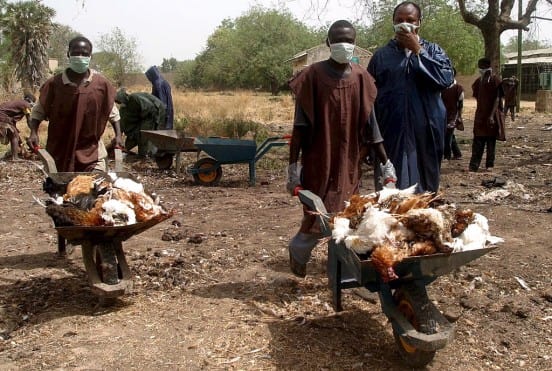 Dead birds are been wheeled by health officials to a burning site at the Phed farms along Gwarzo road, in Kano, Nigeria. Thousands of chickens were burnt at the premises to prevent the spread of the deadly avian virus. An outbreak of the virulent H5N1 strain of bird flu, the first ever case of the disease in Africa. Nigerian officials initiated a series of preventative measures, including quarantine, disinfection and controls on the movement of animals in the country. EPA/ONOME OGHENE

Recently, there were reports of an outbreak of avian influenza also known as “bird flu” in Nigeria. The outbreak, which originated from a small town in the northern part of Nigeria, has progressively spread to about 11 states. In view of this, it is important to keep abreast of the situation and know what steps to take to avoid getting infected and to prevent further spread to other parts of the country and even Africa at large. It’s bad enough that we’re still dealing with Ebola in some parts, let’s not have another situation on our hands.

What Exactly Is Bird Flu?

Bird flu, or avian flu, is an infectious illness caused by a virus that is spread among birds. It often causes no apparent signs of disease in birds, so seemingly healthy birds still pose a health risk to people who come in contact with them.

There are many types of bird flu, most of which are harmless to humans; however, there are two types have caused serious concern in recent years: H5N1 (since 1997) and H7N9 (since 2013) viruses.

Although these viruses don’t infect people easily and are usually not transmitted from human to human, several people have been infected around the world, leading to a number of deaths.

The disease is spread through direct contact with infected birds – whether dead or alive — their droppings, or secretions from their eyes or respiratory tract. Usually it takes close and prolonged contact with an infected bird for the infection to spread to humans. Common modes of transmission to humans include:

Bird flu is not transmitted through cooked food.

As with any other types of flu, bird flu symptoms include a high temperature, general body aches, headache, and respiratory symptoms, such as a cough or runny nose.

However, most people who are infected with bird flu rapidly develop more severe complications like respiratory distress syndrome and even organ failure.

Other uncommon symptoms include diarrhea, vomiting, abdominal pain, chest pain, and bleeding from the nose and gums.

Please note having these flu-like symptoms does not mean you have bird flu; you could possibly just have a common cold.

However, get those symptoms checked out if you have been in recent close contact with birds in an area where outbreaks have been reported. 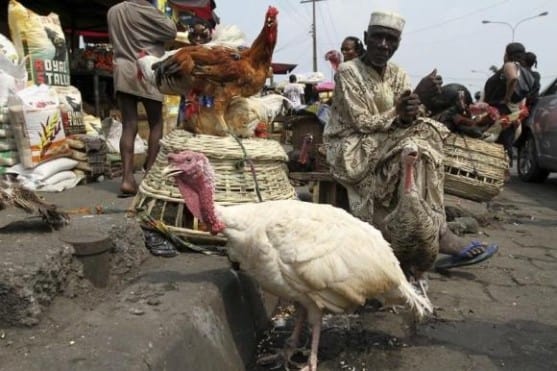 How To Prevent Infection

It is quite difficult to prevent the spread of bird flu between birds, but there are a number of things you can do to reduce your own risk of catching the disease in areas where outbreaks have been reported:

This will also be a good time to avoid buying exotic bird feathers.

What To Do If You Think You Have Been Infected

If you have been in contact with birds or poultry products that have been found to be infected and you have any of the symptoms described above, please contact your doctor immediately.

Even if you haven’t been around birds and their products, please still contact your physician if you develop any symptoms.

You will most likely be advised to stay at home and rest well, drink plenty fluids, and eat healthy or you will be treated at the hospital but away from other patients.

SEE ALSO: Here’s How To Beat Stress at Work