According to research (entitled “Increasing Affluent, Educated, and Diverse African-American Consumers: The Untold Story“) conducted by Nielsen, Black immigrants in the United States are earning more income than U.S.-born Blacks.

Since 1980, the Black immigrant population in the United States has more than doubled to an unprecedented 3.8 million.

Leading the population growth are Jamaicans at 18 percent, Haitians at 15 percent, Nigerians at 6 percent, Trinidadians at 5 percent, and Ethiopians also at 5 percent.

See the full Black immigrant breakdown in the Unites States below: 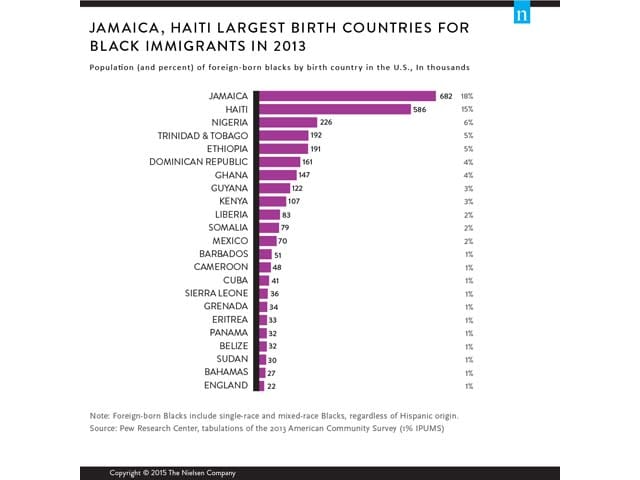 Of the total number of Black immigrants, 36 percent are Africans.

Through its research, Nielsen says that the median household income for Black immigrants comes in at 30 percent higher than African Americans.

Nielsen Senior Vice President of Global Communications Andrew McCaskill explains, “A lot of the African…immigrants are coming specifically to get an education in the States.

“High numbers are college-educated and not only have college degrees, but also Master’s.”

According to McCaskill, Black immigrants’ penchant for entrepreneurship has been one of the pillars of not only building wealth but also keeping that wealth within their respective communities.

“They’re creating jobs in their communities. They are buying products from their entrepreneurs. There typically is a culture of recycling dollars, which contributes greatly to the rising fortunes.”

On the other hand, with African Americans suffering from centuries of institutional racism, discrimination, and violence — with economic powerhouses such as Black Wall Street (a.k.a. Little Africa) being targeted and destroyed during the race riots of 1921 in Tulsa, Oklahoma — African Americans’ entrepreneurial spirit has been dampened over the years.