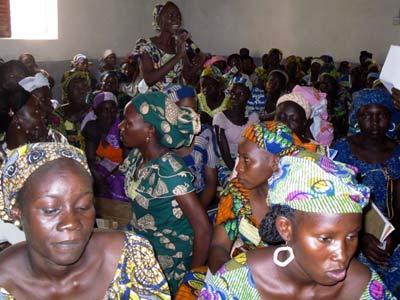 Bamenda, North West Region – Cameroon (Face2Face Africa) This week, women in the city of Bamenda, found in the North West Region of the Republic of Cameroon, organized the maiden edition of an interfaith prayer service to seek God’s attention for peace, good health, and security to reign in the republic in the wake of Boko Haram’s constant attacks of Cameroonian territory.

On Monday, more than 300 women at the Bamenda Congress Hall extended words of thanks to incumbent President Paul Biya for the peace negotiations that led to the release of some 27 Cameroonians and Chinese hostages who were held by Boko Haram militants.

Worshippers at the interfaith service included Muslims, Christians, and some top-ranking government officials, such as the Governor of the North West Region, Adolf Lele Lafrique.

“Women in Cameroon must be at the forefront in the promotion of peace irrespective of their religious and cultural backgrounds.” Mrs. Regina Mundi, the chairperson of the group reminded the women.

At the close of the event, offerings were collected to help the displaced Boko Haram victims in the northern region of the country.

Since the sudden upsurge of violent attacks on Cameroon by Boko Haram militants from neighboring Nigeria, several churches and prayer groups have organized prayer sessions to the Almighty to guide and protect the country from Boko Haram’s deadly attacks.