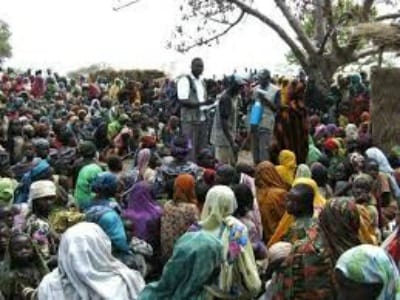 Kolofata and Mora, Cameroon (Face2Face Africa) Some 10,000 Nigerian and Cameroonian refugees who are fleeing constant attacks from the militant Islamic group Boko Haram have been provided temporary settlement by the incumbent government of the West and Central Africa country of the Republic of Cameroon, reports CRTV.

The refugees who are mostly women and children have reportedly been settled in three separate schools in the towns of Kolofata and Mora in the Far North Region of the Republic that shares a common border with Nigeria.

These refugees have been displaced, following the heavy fighting between the Nigerian military and Boko Haram.

Consequently, they have been trekking for hours and days over very long distances, carrying along with them nearly all of their belongings, including cattle. “We are from Goza and those who stayed back have been killed,’’ one of the Nigerian refugees intimated.

The humanitarian conditions under which these refugees are living is appalling due to shortages of potable water and food, “There is no water. We had to trek on foot as there were no motorbikes. One of our women was buried yesterday and one of our children died because of the suffering,” another Nigerian refugee explained.

According to the Senior Divisional Officer, Babila Akoua, of the locality of Mayo Sava, where some refugees have been resettled, the division is on the brink of a humanitarian catastrophe, “It is the feeling of every authority to show concern when people are suffering. It is really a very bad situation.”

In Cameroon, the new school year opens in just one week, and these refugees have been settled in classrooms, where pupils are to study. ‘’We are going to write to the Minister of Secondary and Basic Education to postpone the start of the school year so that measures would be taken to look for permanent settlement camps for the refugees,” the Senior Divisional Officer explained further.