In early 2017, stories of Golden Lead, a Chinese-owned factory operating in the Gambia trended widely in news reports. The factory had been accused of discharging toxic waste into a water body in the small West African country.

Environmentalists and residents in Gunjur, a small coastal town about 50km from the capital of Banjul, told reporters that hundreds of dead fish had been washing up on the lagoon since Golden Lead set up a fish meal factory in the town in 2016.  Moreover, the local stream now had a reddish color and people swimming in it suffered health problems. 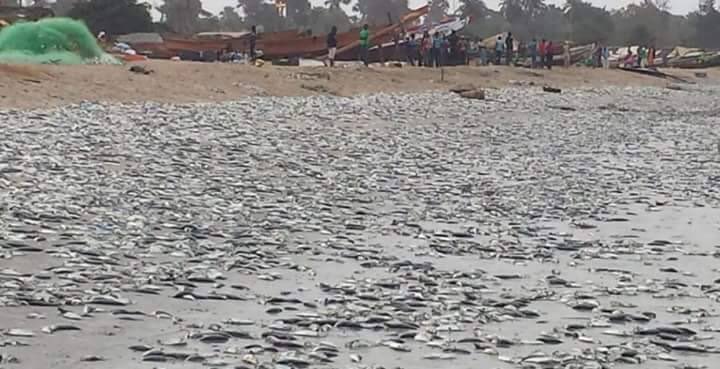 Gambian Minister of Fisheries, James Gomez, however, blamed local fishermen for the pollution on the shores. “What we found out was that some fishermen were using wrong fishing gears to capture juvenile fish from the coastal waters. They decided to dump the fish in the coastal communities of Gunjur and Kartong,” he told local reporters.

The company was forced to pay a bond of 25,000 US dollars in June in an out-of-court settlement with the Gambia’s National Environment Agency over a similar accusation. The company was ordered to take immediate measures to treat its wastewater and pay for testing of already contaminated water.

But it appears that the company has not only failed to treat its wastewater but rather has strengthened its exploits. Recent developments such as an action taken by Gambian youths who reportedly removed the factory’s waste pumps that go directly into the sea for the company to have it reinstalled alongside the Chinese flag have ignited the scorn of social media users. This is especially because the youths were reportedly arrested for the action targetted at reducing pollution.

The Chinese fish meal company Golden Lead dumps its waste in the Gunjur Sea polluting the sea which is a source of income to over 2000 families. Few weeks ago, #Gambian youths removed the waste pumps but the Chinese reinstalled them along with their country’s flag #africansrising pic.twitter.com/PLnxjmUl7J

A country like Gambia where almost the entire population rely on fish for their protein source . Why are we allowing foreigners to take our natural resources without even employing gambians . Apparently fish is in short supply in most market in the Gambia now . I wonder why ?

Have you seen how they preserve their buildings, heritage and environment in their own country. It’s because the African governments just care about exploiting for personal gains.I mean even the damage they did ku chiyadzwa.They should be accountable bt our governments don’t care

Soon the 2000 families will be depending on the Chinese, that’s how the Chinese are slowly creating economic colonies

The nerve of hoisting the Chinese flag on Gambian soil..! Such arrogance

Chinese are the new Colonialists.

Thats messed up, the chinese are feeling entirely too entitled on our soil. This only reinforcing the idea that our leaders are continuing to sell our land From right underneath us

If you an African did the same in China, he’d be long executed before news reach his African relatives back home. Yet we Africans are lenient with Chinese abuse in Kenya, pollution in The Gambia, poaching in southern Africa region. #africansrising

Evidently, the government is cracking down on those speaking out on the issue.

Police arrested these four young men in the #Gambia after one of them delivered a speech protesting against the pollution of the ocean by a Chinese company. Such injustices are caused by systems that take more than the downfall of a dictator to fix. #gunjur pic.twitter.com/cZ9weEBBM8

Still many remain vigilant and are calling for justice for the community and the young men.

People of #Gunjur are demanding for #PresidentBarrow’s Government to stop the Golden Lead Company from polluting their environment, sea and violating their human rights of which @BarrowPresident promise to protect the people! #KilimanjaroDeclaration #AfricansRising #AfricaDay https://t.co/X78MDSk5ij