Dencia (pictured throughout), a singer of Nigerian and Cameroonian descent, has become a globally infamous figure after promoting the skin-bleaching product Whitenicious. In a recent TV interview, Dencia, who has defended Whitenicious’ use before, appeared to say that having lighter skin means a person is more pure.

SEE ALSO: On the Contrary, Feminism Is African

Dencia has justified the Whitenicious product in a series of Twitter rants and previous interviews — each time dodging the possibility she is shaming darker skin tones. Dencia appeared on the U.K.’s Channel 4 News over the weekend and was asked by the White female host of the program if she thought that Whitenicious was promoting the idea that lighter skin was beautiful.

“No, I don’t. Everyone has a choice to look however they want,” said Dencia, styled in a blond wig and donning dark shades. When pressed by the host on her drastic skin color changes over the years (pictured below), Dencia essentially side stepped the inquiry and then explained the use of the sensational product name. 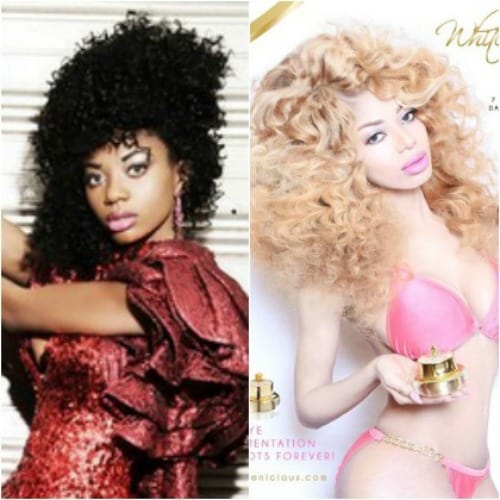 “White means pure, it doesn’t mean White skin but White in general. That’s how I look at it; it means pure,” explained Dencia regarding the Whitenicious name.

Dencia then launched in to a tirade explaining that Whitenicious is used to even out skin blemishes and dark spots. She also claimed that its users want to look “pure” and “clean” but fell short of saying the product is used to lighten dark skin.

Lupita Nyong’o (pictured at right) caught some of Dencia’s Twitter wrath earlier in the month, after the Oscar-winning actress spoke of a letter from a young girl who hated her dark skin until she saw the “12 Years A Slave” star. Dencia took to Twitter to express her disdain toward Nyong’o and continued to promote her brand:

I don’t know her. Her story is her story, that’s her personal life, I don’t care about it. She lied about the letter. If I lighten my skin, it’s my choice,” said Dencia, clearly agitated by the Nyongo’o angle of questioning.

Also on the program was Phinnah Ikeji of Black Role Models U.K. who countered Dencia’s points by stating that Whitenicious is sending a dangerous messages to young dark-skinned girls who wish to emulate the singer’s lighter skin appearance.

Despite saying that she wasn’t uncomfortable with her darker skin of the past, Dencia stood steadfast in her stance that what she is doing with Whitenicious is purely a matter of choice and not shaming dark-skinned women.