Less than five years ago, scientists in West Africa warned that eating monkeys could lead to the rise of deadly viruses that will be hard to cure. In fact, they warned that the continued consumption of monkey meat could cause the next human immunodeficiency virus (HIV).

In 2013, a year after this alarming warning, West Africa suffered the most widespread outbreak of the Ebola virus disease (EVD) in history. The virus, which scientists claim is animal-borne, has caused major loss of life and socioeconomic disruption in West Africa and the larger sub-Saharan Africa.

The total fatality rate in the last Ebola outbreak was reported to be slightly above 70 percent, with the World Health Organization (WHO) reporting a total of 11,310 deaths and 28,616 suspected cases.

Do Monkeys Cause Ebola?

Although it has never been scientifically proven, researchers believe that the stubborn recurrence of the Ebola virus in African countries is largely due to the consumption of bush meat, with monkeys, chimpanzees, gorillas, and bats being common. 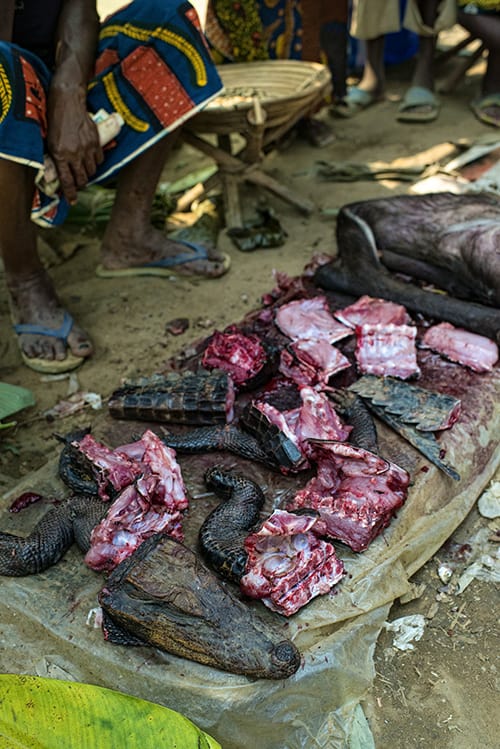 Photo of cut sections of wild animals from the Congo bush being sold for meat; offerings include alligator and small deer. Photo credit: WhyFiles

According to the American Center for Disease Control and Prevention (CDC), Ebola is caused by a virus of the Filoviridae family, genus Ebolavirus. The organization says the virus can cause disease in humans as well as nonhuman primates, such as monkeys, gorillas, and chimpanzees, putting those who are fond of consuming monkey meat at a high risk of contracting the virus.

Yet, a significant percentage of the West African population is still enjoying bush meat delicacies.

Scientists now are worried that new and deadly viruses could be spreading among communities that consume monkey meat in Africa. They argue that the deeper poachers go in to the forest and the more primates are consumed, the more people will be exposed to unknown viruses.

Experts also claim that the continued consumption of monkeys and other primates have increased the potential for the viruses to mutate into more serious diseases.

Why the Carefree Attitude? 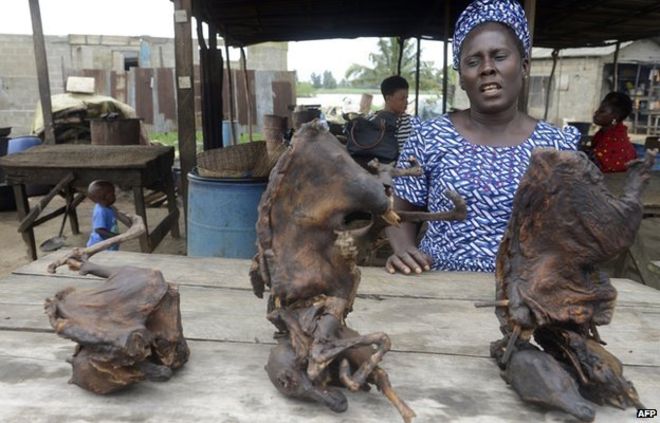 Poverty has often been cited as one of the primary reasons why many Africans continue to consume monkey meat despite the obvious danger of contracting deadly viruses.

Most families in the majority of communities where this practice is widespread live on less than $1 per day, so they do not have access to other affordable, less risky, and sustainable sources of protein.

In countries, such as Sierra Leone, Liberia, and the Central African Republic, civil wars have left many people destitute and desperate for survival, so they resort to hunting wild animals for food. Most of them say monkey meat is tender and juicy.

Additionally, many parts of West Africa are prone to tsetse fly infestation, making it hard for people to keep domestic animals for sustainable meat supply.

But as much as the populace is to blame for the bush meat crisis in some parts of Africa, governments and other relevant bodies have to find better ways of sensitizing people on the dangers of eating wild meat to keep them from continuing this dangerous practice.