Africa should gladly welcome England as its new member, the 2018 Commonwealth programme has inferred in its latest blunder.

In the official Games opening ceremony programme, England was accidentally named as an African nation. The 130-page programme, which includes profiles on the 71 Commonwealth Games nations, also listed England as being a country of about 2 million people with the capital as “Banjul.”

But Banjul is actually the capital city of The Gambia, and England’s population is about 53 million. So what could have prompted this huge blunder ahead of the ceremony, is the question many are asking. 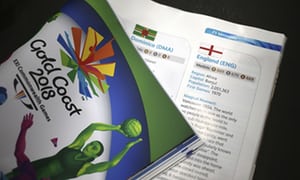 The 2018 Commonwealth Games programme — The Guardian

“There was an overprint. We found out about it maybe 10 days ago,” he said.

“We went and spoke to England and said ‘Congratulations, the Commonwealth’s changing and it has since Brexit, and part of you is now part of Africa’,” he said.

“Sometimes you make mistakes and we cop it,” he was quoted by news site ABC Online.

Mr Peters added that a reprint of 500 programmes with the correct information would be given to the English and Commonwealth Games Federation.

The $10 program also features messages from prime minister Malcolm Turnbull and other dignitaries as well as an official welcome from the Queen.

This is not the first time a blunder of this sort has occurred at an International sporting event. In 2003, the wrong Spanish national anthem was played at the opening ceremony of the Davis Cup tennis final in Melbourne.
The incorrect Chinese flag was also hoisted on two occasions at the 2016 Rio Olympics.