While the rest of Africa was under colonial rule after the infamous partition by European powers at the Berlin Conference of 1884, Ethiopia was a sovereign nation with a formidable army and a strong monarchy.

A few years after the division of the continent, the Italian Kingdom – which had obtained Eritrea and Italian Somalia as its African territories – wanted to add Ethiopia to its kingdom on March 1, 1896.

This was a failed effort after the defeat of the Italian army in the Battle of Adwa which is also described as the First Italo-Ethiopian War. The battle fought near the northern town of Adwa in Ethiopia’s Tigray Region is the first victory by an African country over a colonial power.

The country celebrates this victory annually on March 2 with a public holiday, public celebration and procession in the capital Addis Ababa and across Ethiopia. Thousands are commemorating the 122nd anniversary this year amid tight security due to political tensions in the country.

Good morning #Ethiopia! Thousands of #Ethiopians have gathered this morning in the capital #AddisAbeba to commemorate the 122nd anniversary of the battle and subsequent victory of #Adwa, the first African victory against an invading colonial forces of #Italy. #Adwa122 pic.twitter.com/Q9FX6OJVBy

Genesis of the Battle of Adwa

Prior to the battle, the Italians had signed the Treaty of Wuchale with Menelik II in 1889. The treaty ceded territories which were part of Ethiopia to Italy in return for financial assistance and military supplies.

However, the treaty was misinterpreted by the Italians who had stated in the Italian-language version of the disputed Article 17 that the Emperor of Ethiopia was obliged to conduct all foreign affairs through Italian authorities. This makes Ethiopia a protectorate of the Kingdom of Italy.

Meanwhile, the Amharic version of the article stated that the Emperor could use the offices of the Kingdom of Italy in his relations with foreign nations. The Italians claimed that Menelik II had knowingly signed the treaty with the disputed article, therefore, he needs to abide by it.

In order to force the Ethiopians to abide by the Italian version of the treaty, they launched a military operation from their base in Eritrea in 1894 with victories and advances into Ethiopian territory led by General Oreste Baratieri. 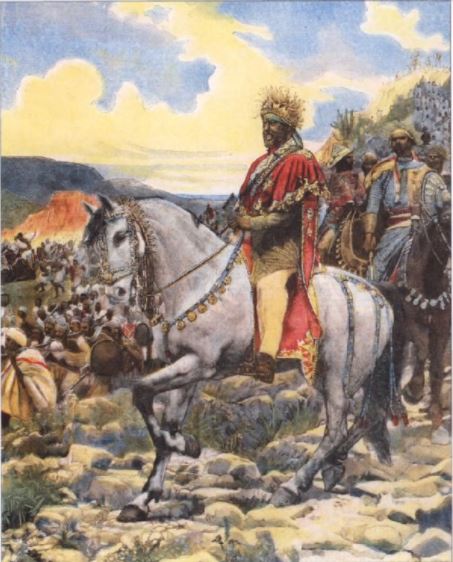 Painting of Menelik II during the battle

On the night of February 29, 1896, and the early morning of March 1 three Italian brigades advanced separately towards Adwa over narrow mountain tracks, while a fourth remained camped.

The Ethiopian forces positioned themselves on the hills overlooking the Adwa valley, in perfect position to receive the Italians, who were exposed and vulnerable to crossfire.

By March 2, the Italian forces were ambushed and slaughtered including their commanders with about 7,000 killed and 1,500 wounded in the battle. Those who retreated back to Eritrea left behind all of their artillery and 11,000 rifles, as well as most of their transport. About 3,000 Italians were taken prisoners.

800 captured askaris – Eritrean soldiers who fought alongside the Italians – were regarded as traitors by the Ethiopians and had their right hands and left feet amputated. Some reports say they were castrated with some Italian prisoners as punishment.

General Baratieri was relieved of his command and later charged with preparing an “inexcusable” plan of attack and for abandoning his troops in the field.

He was acquitted on these charges but was described by the court-martial judges as being “entirely unfit” for his command.

Forty years after the victory of Adwa, on October 3, 1935, the Italians launched a new military campaign endorsed by Benito Mussolini called the Second Italo-Abyssinian War.

This came about after a lack of action by the League of Nations following Italy’s breach of its tenets to wage war against Ethiopia since it was also a member state.

The Italians attacked Ethiopia with superior military technology such as tanks and aircraft, as well as chemical warfare, and the Ethiopian forces were defeated by May 1936.

Italy occupied Ethiopia for five years (1936–41), before eventually being driven out during World War II by British Empire and Ethiopian patriot forces.