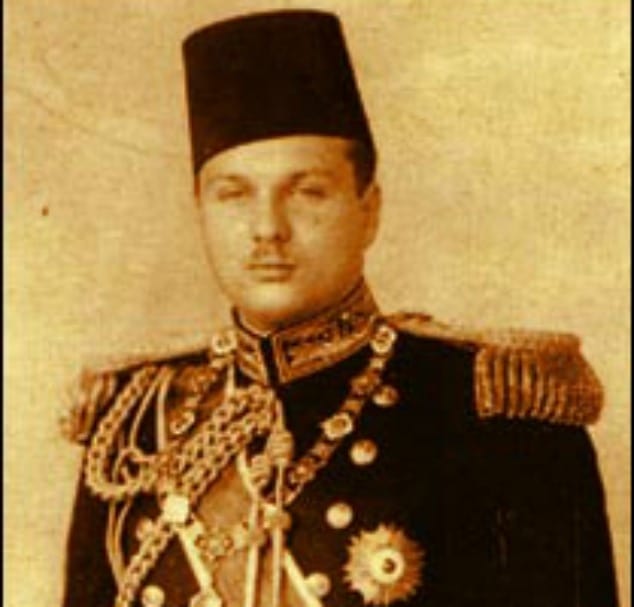 Farouk I (pictured) of Egypt was the African country’s last king, succeeding his father Faud I of Egypt. Farouk died while in exile in Italy in 1965, some years after the country declared itself a republic and put an end to the royal monarchy.

His Majesty Farouk I, by the grace of God, King of Egypt and Sudan, Sovereign of Nubia, of Kordofan, and of Darfur was the king’s proper title, rising to his position at age 16 after his father’s death in 1937. Popular in his youth, Farouk had infamous expensive tastes and enjoyed the trappings that accompanied the royal lifestyle. His flamboyant lifestyle and European shopping sprees angered his followers, and he amassed heavy debt in his time in rule.

Farouk also drew criticism for not standing in solidarity with his people during the Second World War, when German and Italian forces bombed and forced much of the country in to darkness.

Farouk continued to live as he had, while many of his people lived without.

Farouk was criticized for his lack of proper leadership and government corruption, and his forces were also the topic of concern, after it didn’t prevent the loss of a large portion of Palestine to Israeli forces. These events led to a group of military officers led by Gamal Abdel Nasser and Anwar Sadat to overthrow Farouk with the help of American’s CIA in 1952. The operation’s codename was “Fat F*cker” — no doubt a reference to the ballooning weight of King Farouk.

Farouk fled to Monaco and Italy in exile, remaining there for the rest of his life. The Egyptian government sold and auctioned off many of Farouk’s items, with some fetching millions of dollars by collectors in later times.

Farouk died in the Ile de France restaurant  in Rome, after what was reported to be a heavy meal as was his custom. He was 45.