Kimberly Godwin is the Emmy Award-winning television news and broadcasting maven you may not have heard of – until now. 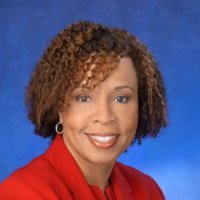 Born in Panama City, Florida, she is the first African-American woman to become the vice president of news at CBS while simultaneously holding the position of senior broadcasting producer of CBS Evening News since 2004. She is also the executive director for development and diversity.

Ironically, Godwin wasn’t interested in a career in journalism.  “I was not one of those kids who grew up watching the news, wanting to do that,” she recalled to Black Enterprise.  After Margarita Pool, a news producer at CBS came to her school’s career fair, Godwin ditched her plans of going to pre-medical school. “I asked her if I could visit her at work and, watching her, I could not believe there was an African American female in charge of stuff! I thought, ‘I want to do that,” Godwin explained.

Godwin then volunteered under the wing of her college professor Phil Keirstead  – a producer for a local ABC newscast. “I started talking my way into doing things—ghost rundowns, then rundowns. I talked my way all the way into the control room. I started doing the lineup and learned how to edit. When my professor quit, the news director called and offered me the job. So, my first full-time job was as executive producer.”

Godwin went on to hold the title of newsroom leader in the major media markets such as New York City, Los Angeles, Dallas/Fort-Worth, Texas, and Philadelphia.  She’s also served as an educator; formerly an adjunct professor of newswriting, reporting, and ethics and the interim director for journalism at the School of Journalism and Graphic Communication at Florida Agricultural & Mechanic University.

Godwin graduated from Florida A&M University with a bachelor’s degree in broadcast journalism.

She is currently the Chair of the Board of Visitors of the journalism school at FAMU and a member of the National Association of Black Journalists.

Her nuggets of wisdom? “Earning it is good. Asking for it is great. Being prepared for it is key.” “There is so much more we can teach women about asking. But you can’t just ask. Be prepared to do it.”