The Black Panther movie has come with so much energy, particularly, among many Afro-centric fans. Reviews and discussions around the characters and the vibranium-rich fictional East African nation, Wakanda, are unending.

The movie, apart from centring on the exploits of a black superhero, put a spotlight on the all-female warriors who were dedicated to protecting the ruler of Wakanda. That is where Ayo (Florence Kasumba) comes in; she made an instant impression on film audiences as a lead member of the ferocious all-female Wakandan army.

Florence Kasumba was born on October 26, 1976, in Kampala, Uganda. The 41-year-old actress, who lives in Berlin, Germany has been filming in English, German and Dutch since 2000. She began her career in 2001 with the movie Ik ook van Jou.

She subsequently appeared in the film The Stoning as Nilophé in 2006. In that same year, Kasumba appeared in the TV series Tatort which had a total of 7 episodes. Kasumba played various roles in the series which lasted till 2016.

In 2007, she played in two TV series – Die Familienanwältin and Four Women and a Funeral. She appeared in the movie Das Papstattentat in 2008 and the following year with Romy.

In 2010, Kasumba starred in the following movies: Kongo, Kreutzer kommt and SOKO Donau (TV Series). She later in 2011 appeared in the movie Buschpiloten küsst man nicht. Kasumba followed with Transpapa and Das Vermächtnis der Wanderhure, a movie in 2012.

In 2013, she starred in three TV series: Großstadtrevier, The Last Cop and In aller Freundschaft. She then followed with Zeit der Kannibalen and The Quest, also TV series in 2014. In 2015, she starred in the film Inas Neues Leben and appeared in two TV series – Die letzte Spur and Dominion – that same year.

A year after, she starred in Offline: Are You Ready for the Next Level?, Wie Männer über Frauen reden  and Marvel’s Captain America: Civil War, where she is often remembered for her famous line “Move or you’ll be moved” that she boldly told Scarlett Johansson’s Black Widow in the movie.

Following her first appearance in the Marvels Cinematic Universe, Kasumba followed it with Senator Acantha in 2017’s Wonder Woman of DC Extended Universe. This makes her one of the few actresses to have appeared in the MCU and the DCEU. She also played the Wicked Witch of the East in the TV series Emerald City.

Kasumba, in that year worked with Paul Rudd in Mute. She has since appeared alongside Lupita Nyong’o in Black Panther, where Kasumba played a member of the Dora Milaje (all-female army). Kasumba is now slated to star in the upcoming live-action Lion King film alongside Beyoncé, Donald Glover, and J.D. McCrary in 2019.

Rumours of her role in Black Panther

In April 2017, Vanity Fair writer Joanna Robinson reported that she had seen footage from Black Panther in which Ayo (Kasumba) flirts with Okoye (Danai Gurira), a fellow member of the all-female army. Even though a Marvel representative said their relationship was not intended to be romantic, the rumour of the romance reappeared a week after. 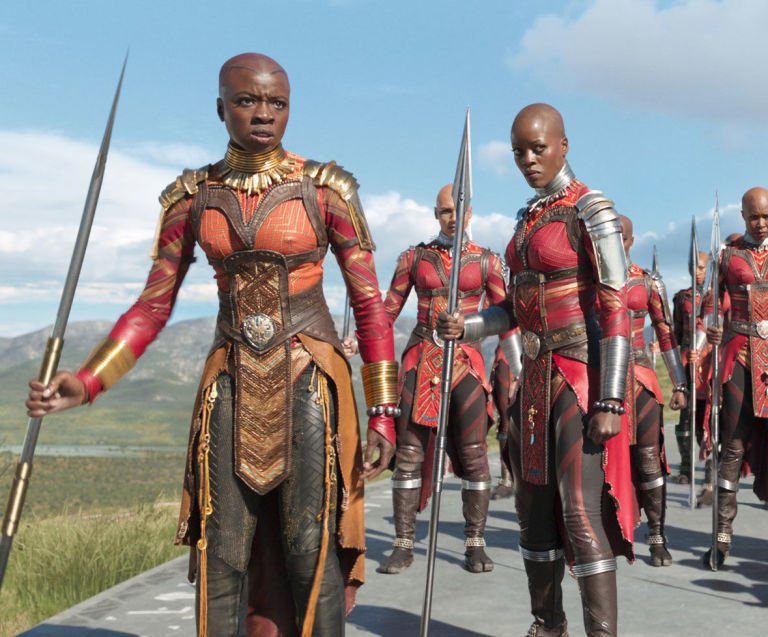 When vulture.com asked Kasumba about the rumours, she said the scene existed but was cut for reasons she is yet to know.

“The thing is, if the makers would have wanted everyone to see the scene, it would have been in the movie. The final result that we’ve seen, there were a few scenes that have been cut. Different scenes, also. They didn’t make it into the movie for certain reasons, and at that point, I have to say: What their reason is, I can’t tell you, because nobody told me about whether it’s in or not,” she explained.

She was nominated for the Black Entertainment Film Fashion Television & Arts Award for International Rising Star in 2016, against Lupita Nyong’o, John Boyega and Lisa Awuku.

Florence Kasumba has a dance background and also does martial arts. This came in handy for her role as a warrior in Black Panther.