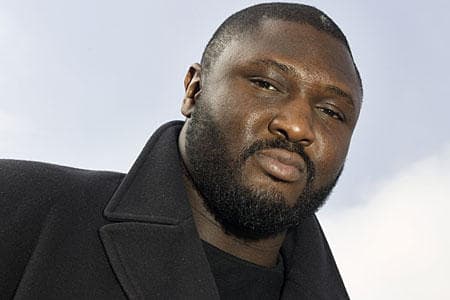 At 6'6, British-Nigerian actor, Nonso Anozie, is a giant of a man; but it seems that his physical size just might be eclipsed by his remarkable acting ability. The actor got his start on the British stage and has slowly but surely made a name for himself over the years. As the second black cast member of HBO’s Emmy Award-winning show, Game of Thrones, Anozie is in an undoubtedly enviable position.

Speaking about his role in the hit show, opportunities for black actors in the UK and in the U.S. and a former teacher’s discouragement of his acting dreams because of his race, this interview by The Root is an introduction to Nonso Anozie.

The Root: Is it easier to find work in England or America as a black actor?

Nonso Anozie: Many actors are coming to America to work. Idris Elba [who is British] was huge in America, and no one knew a thing about him in London until The Wire began airing in the U.K., which was after the final season's end. Then he became that black guy from The Wire for his character Stringer Bell … In America, once you get into the pool of black actors that are working, you're good. Then they gradually let more people into that pool — in England, there's not a pool yet.

TR: Game of Thrones has black and brown characters — Lucian Msamati's pirate Salladhor Saan and Jason Momoa's Drogo — where many fantasy films and television shows don't. Tell me about that.

NA: HBO really wanted to cast me in the first season, and I auditioned for a character but then I got another pilot. They loved my audition so much that when this character Xaro Xhoan Daxos came up, they called. He's richer than [villain] Tywin Lannister, so the black dude's the richest guy on the show. Xaro meets Daenerys Targaryen while she's wandering in the desert. She's got dragons, I'm really rich, let's see what we can do — and we start a friendship. It's really interesting what we get into for the rest of the season, but I can't say anymore because of how it all turns out. ….

TR: How did you get into acting?

NA: I was born in London, grew up in Camden. I got a taste for acting at 10 years old — my headmaster had me play the daddy in the Bible story of the prodigal son. I put on a big coat and glasses. People laughed at the end, and I got something from it that I never wanted to release. I got really into it at 18 and tried acting without going to university, and that was hard … I didn't come from a theater family, and when I told my careers adviser about acting, he suggested I look at something like plumbing, saying, "Even young, handsome white boys find it difficult acting — you're a 6-foot-6-inch black man."

Read the complete interview on The Root.