Forecasts from three top lenders, the World Bank, the African Development Bank, and the International Monetary Fund suggest that Ghana will be Africa’s fastest growing economy in 2018.

Ghana’s projected position at the top of the continent’s economic chart, the last it has seen in three decades, is supported by three factors: rising revenue from commodities, decreasing national deficit and increasing access to credit, and expected diversification of the economy. 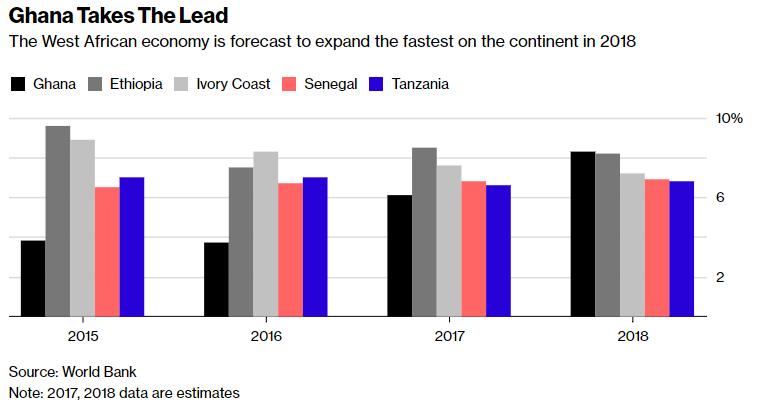 For revenue from commodities, Bloomberg highlights three mainstays of the $43 billion economy – oil, gold and cocoa- with rising crude output and rebounding oil prices expected to boost the nation’s finances. Although global demand for gold has slumped this year, its use in technology such as smartphones, cars, and laptops means the market is not in “bad shape”. The country’s new government led by President Nana Akufo-Addo is also investing in agriculture which will support the cocoa industry. Ghana is the world’s second-largest producer of cocoa after Ivory Coast.

On the national deficit, the government has been adamant about tightening the country’s finances. In 2015, the country saw spiraling debt, high inflation, falling cedis, all of which contributed to a ballooned budget deficit which the country had to borrow almost $1 billion to finance. As of December 2017, inflation is 11.8, down from a record 19.2 percent in March 2016. Credit growth in the private sector has also doubled.

“What distinguishes Ghana from others is the progress it is making in improving its fiscal credibility, by sticking to its targets and implementing other reforms,” Yvonne Mhango, an economist at Renaissance Capital in Johannesburg told Bloomberg. 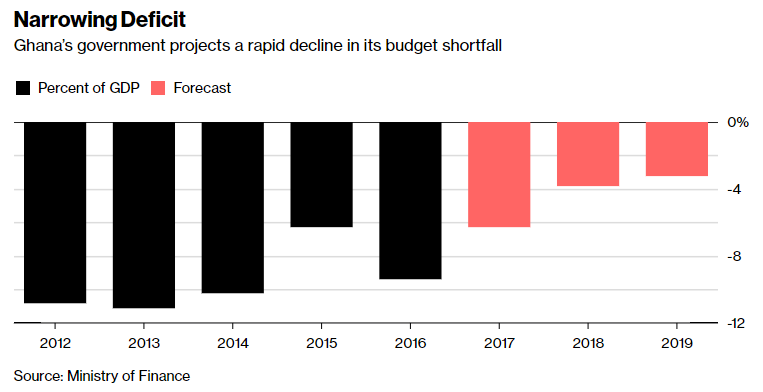 Akufo-Addo’s government has made plans to diversify the economy away from commodities, with plans for a factory in every one of the nation’s 216 districts.

“There will be much more focus on whether a robust recovery in the non-oil economy manifests itself. ”

PwC’s Global Economy Watch for 2018 also predicts that eight of the ten fastest growing countries in 2018 could be in Africa, with Ghana leading the charge. The report says the country’s predicted growth will be higher than China’s. Analysts warn that the increasing demand for energy could hamper growth, and must be considered in plans for the year.