Based on archaeological and anthropological evidence that has existed for thousands of years, many scientists believe that Homo sapiens evolved from their predecessors, the hominid or the great apes. This evolution is said to have taken place in East Africa about 200,000 years ago, with migration to other landmasses supposedly occurring about 100,000 years ago.

This concept of human evolution has been one of the closest clues the world has had regarding the origin of humanity, but according to the latest discoveries in Morocco, it is no longer tenable.

Earlier discoveries from the same site in the 1960s by miners clearing a hillside were assumed to be only 40,000 years old, but Professor Jean-Jacques Hublin of the Max Planck Institute (MPI) for Evolutionary Anthropology in Leipzig, Germany, felt that something was amiss and embarked on a new mission to reanalyze the site.

For more than a decade, he and other anthropologists from MPI reassessed fragments excavated from the site using hi-tech methods and are now presenting new evidence that tells a completely different story. 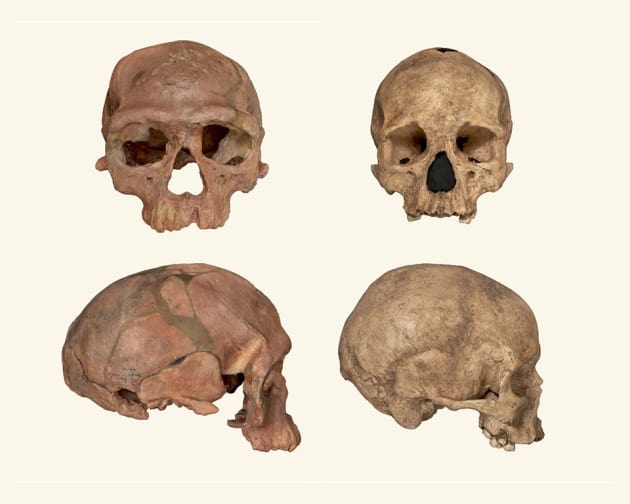 Some of the human fossils found in Morocco. Photo credit: Nature

The new findings date back to between 300,000 and 350,000 years old, with the skull form being almost identical to modern humans. The only visible difference in the skulls when compared to modern humans is a slightly more prominent brow line and smaller brain cavity.

Prof. Hublin now says the evolution of Homo sapiens may have involved the entire continent of Africa.

“It is not the story of it happening in a rapid way in a ‘Garden of Eden’ somewhere in Africa. Our view is that it was a more gradual development and it involved the whole continent. So if there was a Garden of Eden, it was all of Africa,” Prof. Hublin told the BBC.

What Does It Mean?

Essentially what this means is that the entire history of human evolution will have to be rewritten, including discarding existing textbooks that suggest the emergence of Homo sapiens happened in East Africa.

Furthermore, this new evidence pushes back the beginning of the Middle Stone Age, the time when Homo sapiens began to make sharp blades from stone. 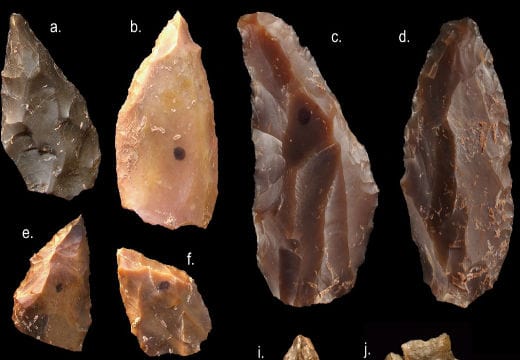 Some of the stones collected at the Jebel Irhoud site in Morocco. Photo credit: Nature

It has also ignited a rather emotive debate about the actual origin of modern human beings, with some people now suggesting that it’s no longer reasonable to infer that humanity evolved from Africa.

Professor Chris Stringer from the Natural History Museum in London, who wasn’t involved in the recent excavation, said that the world needs to get away from the idea that Homo sapiens evolved from a single cradle in Ethiopia, East Africa, even raising the possibility that Homo sapiens may even have existed outside of Africa.

“We have fossils from Israel that are probably the same age and they show what could be described as proto-Homo sapiens features,” Prof. Stringer said.

Others argue that evolution is not a straight line; that it’s one that develops many branches, some of which die off. They say the lost branches could reemerge and sprout other branches, which then branch off and recombine.

Recently, scientists discovered that the human family split off from its closest relative, the Neanderthals, around 500,000 years ago, but can’t yet say when exactly the Homo sapiens became “humans.”

With all these complexities, it’s difficult for us to authoritatively say the recent specimens discovered in Morocco or the previous discoveries in Ethiopia are our true ancestors. It is also not possible to dismiss the notion that our real ancestors may have existed outside of Africa.

But be that as it may, the story of how humankind evolved has been and still remains quite interesting even to the most experienced scholars.

Who knows when the next discovery will be and what continued discoveries could tell us about the first humans who walked the earth?

All we can do is wait and see.