For their proud display of wealth and culture and their dominance in West African history, the Ashanti tribe till date remains one of the most prominent and popular clans of the Akan ethnic group in West Africa. Today, they are mostly found in all parts of Ghana and neighbouring Cote d’Ivoire but originally emerged from modern Ghana.

Princess Ewurabena Pokou was born on a Tuesday between 1700 and 1720 in Kumasi, Ghana. Her father was a warrior who was not documented because he had no royal lineage. Princess Pokou gained her royalty through the matrilineal culture of the Ashantis. Her mother, Nyakou Kosiamoa was the niece of Osei Kofi Tutu I, co-founder of the Ashanti Empire. 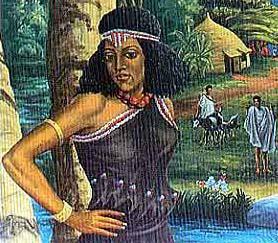 Abena is a traditional name of the Akans given to a girl born on a Tuesday. In the Akan oral history, Tuesday borns are described as bold, powerful and independent. Princess Pokou lived by her name and was known for her feisty nature.

During the expansion of the Ashanti, many subgroups were forced to recognise themselves and submit to the Ashanti Empire fully. Princess Pokou found it unnecessary that the Empire wanted more power and control. The dispute led to war, and Princess Pokou decided to migrate with her fetish priest, her son and a group of willing Ashantis to new territory.

Vowing never to return home, she moved with her people Westward from the Ashanti Kingdom towards the Kamoe river. The small group successfully reached the Kamoe river but were unable to cross knowing that it had crocodiles in it. 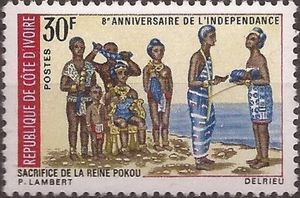 According to the oral history of the Baoule people in Cote d’Ivoire, Princess Pokou consulted her priest on how to cross the river. After consulting the gods, her priest informed her that a sacrifice of her most valuable possession has to be made for her people to cross over successfully. Princess Pokou sacrificed her son, throwing him into the river to appease the crocodiles and the people were able to cross over leaving Ashanti territory and Ghana as a whole.

The people and their princess journeyed on until they reached fertile land and settled in what is now modern-day Cote d’Ivoire. They named themselves Baoule, which meant the ‘child is dead’ to serve as a reminder of the sacrifice of their leader.

Princess Pokou became Queen and ruled until she died around the 1760s, however, in her short reign, she was able to expand her kingdom and make the people successful farmers and traders amassing wealth. She also instilled bravery and confidence in her people who go down in history as waging the longest war of resistance to French colonization in the whole of Africa and holding on to their traditional beliefs and way of life. This is why the tribe remains the biggest in Cote d’Ivoire till date.

Through the loss of language, the name of the Princess which was originally Ewurabena Pokou has been altered into many variations such as Awura  Pokou, Aura Pokou and Abla Pokou which is the most popular of the two. 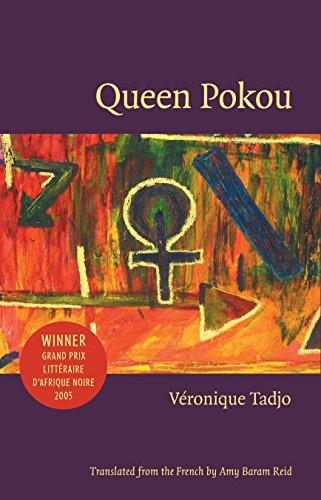 Her story has been rewritten mainly in French explaining why it has been unknown in English circles for such a long time. Recent translations in English are bringing her story to light and making her one of the bravest queens in West Africa.

Ivorian writer, Veronique Tadjo won Grand Prix Literaire d’Afrique Noire for her book Rein Pokou which was later translated into English. She is widely studied in schools in Cote d’Ivoire and was honoured with a postal stamp.