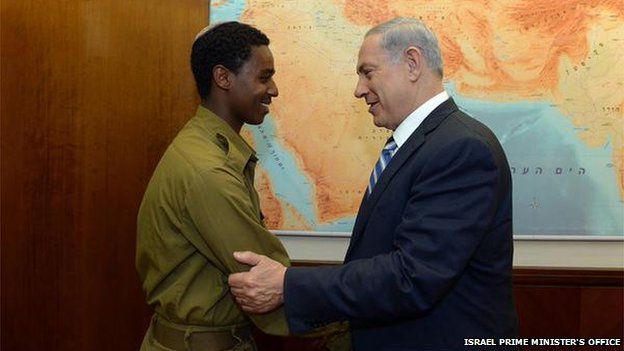 A day after an anti-racism protest in Tel Aviv turned violent, Israeli Prime Minister Benjamin Netanyahu met with assaulted soldier Damas Fekade and Ethiopian Israeli activists in a show of solidarity against discrimination, reports the BBC.

On Sunday, hundreds of Ethiopian Israelis protested in the streets about a week after a video of Fekade (named as Damas Pakada in other reports) being assaulted by police became public.

The protests soon turned violent, with dozens being wounded and arrested.

Yelling, “Not black, not white, we’re all human beings” and “a violent cop should be jailed,” hundreds of protesters crossed their arms in unity to say no to handcuffing.

In all, 56 police officers and 12 protesters were reportedly wounded as police fired water cannons and stun guns in to the crowds, while demonstrators turned over a police car, threw stones and bottles, and destroyed property.

“We must look directly at this open wound. We have erred. We did not look, and we did not listen enough.”

After meeting with Fekade and Ethiopian Israeli community leaders, where he reportedly praised Fekade and admitted he was shocked by the video, Netanyahu lent his voice to the call for racism against Ethiopians to be “eliminated.”

“We must stand together as one against the phenomenon of racism, to denounce it and eliminate it.”

Meanwhile, one of the officers involved in Fekade’s brutality has reportedly been dismissed. The other officer remains suspended.

An investigation is still underway.

Sunday’s protest is not the first for the Ethiopian community in Israel.

In 2012, Ethiopians protested Israeli landlords refusing to rent homes to them.

Since Ethiopian Jews were airlifted in to Israel during the 1980s and 1990s, integration in to society has been a challenge.

The majority of Ethiopian Israelis do not finish high school, are often incarcerated, and are generally paid considerably less than the wider population.