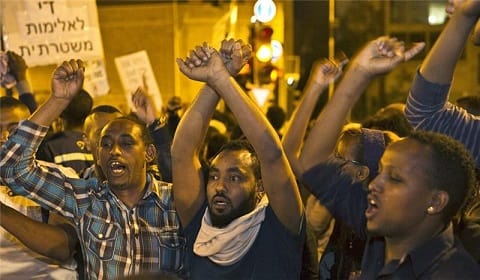 After a video showing police abusing a soldier became public, Ethiopians came out in their numbers in Tel Aviv, Israel, on Sunday to protest against racism and police brutality, reports the Guardian.

The video made its debut last week, showing Damas Pakada, a soldier of Ethiopian descent, being attacked by police in what appears to be an unprovoked attack.

In the video, Pakada appears to be walking with his bicycle when he is accosted by a policeman who then shoves and punch him. Another officer joins in, ultimately pushing Pakada to the ground.

By the time Pakada picks up a stone in self-defense, a third officer makes it to the scene.

Moments later, the video, which was taped by a closed-circuit video camera, ends.

Watch the video of Damas Pakada being manhandled by police here:

The video prompted Sunday’s protests, with one demonstrator explaining, “Our parents were humiliated for years. We are not prepared to wait any longer to be recognised as equal citizens. It may take a few months, but it will happen.”

A female demonstrator added, “I’ve had enough of this behaviour by the police. I just don’t trust them any more. … When I see the police I spit on the ground.”

Yelling, “Not black, not white, we’re all human beings” and “a violent cop should be jailed,” hundreds of protesters crossed their arms in unity to say no to handcuffing.

In all, 56 police officers and 12 protesters were reportedly wounded as police fired water cannons and stun guns in to the crowds, while demonstrators turned over a police car, threw stones and bottles, and destroyed property.

See photos from the protest here:

While Israel’s population is more than 8 million, the Ethiopian community is about 135,500.

Thousands of Ethiopian Jews live in Israel, many of them secretly airlifted into the country in 1984 and 1990 after a rabbinical ruling that they were direct descendants of the biblical Jewish Dan tribe.

But their absorption into Israeli society has been difficult. Ethiopian community members complain of racism, lack of opportunity in Israeli society, endemic poverty and routine police harassment.

While the two policemen involved in the incident have been suspended and called a “disgrace” by Public Security Minister Yitzhak Aharonovich, immediate parallels between the United States and Israel began, with many citing the mistreatment of Blacks by police in America with the recent death of Baltimore resident Freddie Gray.

Israeli officials are said to be bristling with the comparison, with Aharonovich adding that the police force “needs to examine itself.”