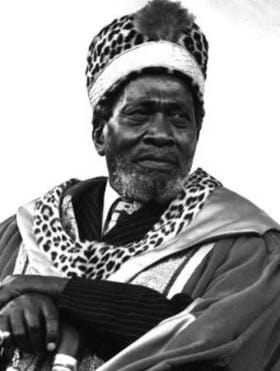 Famed Kenyan revolutionary leader and first President Jomo Kenyatta (pictured) remains an important political figure of African history and liberation. Before he led Kenya to independence, Kenyatta was tied to the Mau Mau Society, a fierce anti-colonialism group that warred with the rulers of British East Africa. Consequently, Kenyatta was arrested on this day in 1953.

Kenyatta was born Kamau wa Ngengi during the late-1880s to early 1890s; Kenyan birth records were not kept during the time. Born part of the Kikuyu, which are also a part of the Bantu people, Kenyatta kept close to the traditions of his family. As a young man, he entered a missionary school and learned the subjects of English and science while embracing the Christian faith.

After working a series of trade jobs, he adopted the name Jomo, which means “burning spear,” Kenyatta and worked in Nairobi. It was then in 1922 that Kenyatta became involved in politics and joined with Harry Thuku, a fellow Kikuyu who formed the East African Association (EAA).

Kenyatta later joined the Kikuyu Central Association (KCA), after the EAA disbanded under pressure from the government. In 1928, Kenyatta began the monthly Kikuyu-language newspaper called “Mwigwithania,” which translates into “bringing together.”

Kenyatta’s time in London while he attended college transformed his mind-set and expanded his world view. Enrolled at Woodbrooke Quaker College in Birmingham, his anti-colonial stances grew as he continued to make claims to land owned by his people that largely went unheard. He eventually enrolled at the University College London in 1934, later studying social anthropology. Soon after, Kenyatta began to adopt communist ties and worked alongside the International African Service Bureau, which focused heavily on pan-Africanist concerns.

Kenyatta stayed outside of Kenya for 15 years as he completed his studies and was grouped in a collective of intellectuals that included George Padmore, C.L.R. James, Paul Robeson, Amy Ashwood, and Ralph Bunche among others. In 1938, he revised his thesis into a book titled “Facing Mount Kenya.”

Kenyatta returned to Kenya in 1946, leaving his British wife and marrying Grace Wanjiku who later passed away in childbirth in 1950. Kenyatta was appointed leader of the Kenya African Union (KAU) in 1947 and went around the country fighting for independence.

The Mau Mau Rebellion exploded in 1951, and because of Kenyatta’s political ties and prominence, many say he was implicated by British rulers for inciting unrest. Governor Evelyn Baring declared Kenya to be under a state of emergency in October of 1952 and arrested Kenyatta and 180 other suspected Mau Mau members.

The group went on trial in January of the next year, with Kenyatta getting sentenced to six years of hard labor to Lokitaung before being he was moved to the remote location of Lodwar.

Kenyatta’s trial was watched globally, and as it was later learned, many witnesses lied on the stand and essentially made Kenyatta the face of the Mau Mau Society. The Mau Maus were eventually defeated by the British Army and the country settled back down under the ruling class.

With the help of the Kenya African National Union (KANU) and with the support of 1,000,000 signatures demanding his release, Kenyatta was released on August 14, 1961. He was elected KANU’s president while imprisoned and quickly inserted himself in legislative matters; Kenya’s constitutional independence had been under negotiations since 1961 and eventually the country’s freedom from British rule would come to pass in December 1963.

Already serving as the country’s prime minister, Kenyatta was moved to the position of president in June 1964, after Parliament amended its constitution to make Kenya a republic. Kenyatta ruled in his post until his passing in August 1978.