A Kenyan primary school teacher was last week sentenced to 90 years in prison for sexually assaulting 9 male students, aged between 13 and 16.

Mr. John Gichia Mugi, a 23-year-old teacher in Murang’a County, was found guilty of defiling the nine boys in Kiharu, Murang’a between January and May 2015.

Delivering the sentence on June 16, Magistrate Jesse Masiga ruled that the accused will serve ten years for each assault, all of which will run consecutively.

The tough talking magistrate bashed Mr. Mugi accusing him of breaching the trust bestowed upon him by the parents.

“The prosecution has proved beyond reasonable doubt that you sexually assaulted the boys. I sentence you to serve a 10-year prison term for each of the nine counts of sexual assault you are charged with. The sentences will run consecutively,” the magistrate ruled.

According to the Daily Nation, the clandestine acts were uncovered by one of the victims who insisted to be allowed to go home with his parents at the end of a parent’s meeting. Asked why he wanted to leave, the boy revealed how Mr. Mugi used to sexually assault them at night.

The accused is said to have gone into hiding following the revelation, but was later apprehended and taken to court. 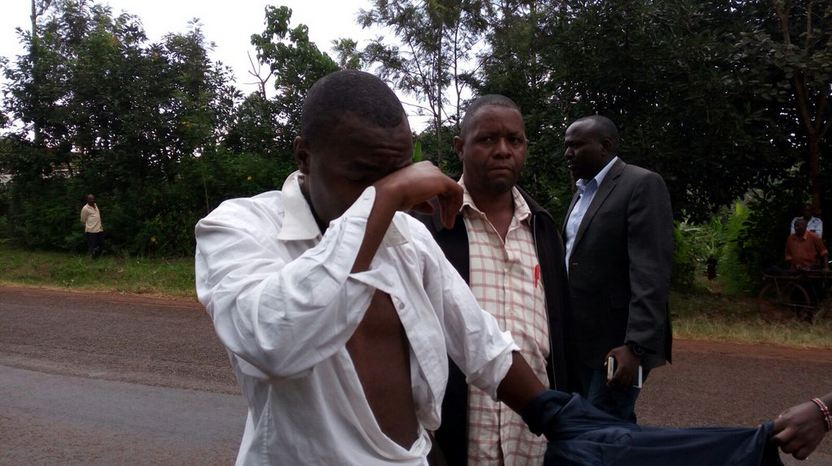 The accused teacher Mr. Mugi during his arrest. Photo (nairobiwire.com)

In his defense, Mugi claimed that the students had conspired with some teachers in the school to frame him saying the students hated him for his strictness.

He also claimed that his strong Christian values would not allow him to carry out such shameful acts.

However, medical reports presented to court showed that the students had been indecently assaulted but not molested.

The victims further narrated to court how Mr. Mugi attempted to molest them in their dormitories but they resisted. They said he fondled and licked their private parts.

The incident led to the dismissal of the school’s Head Teacher who was later removed from the Teachers Service Commission payroll for attempted cover-up.