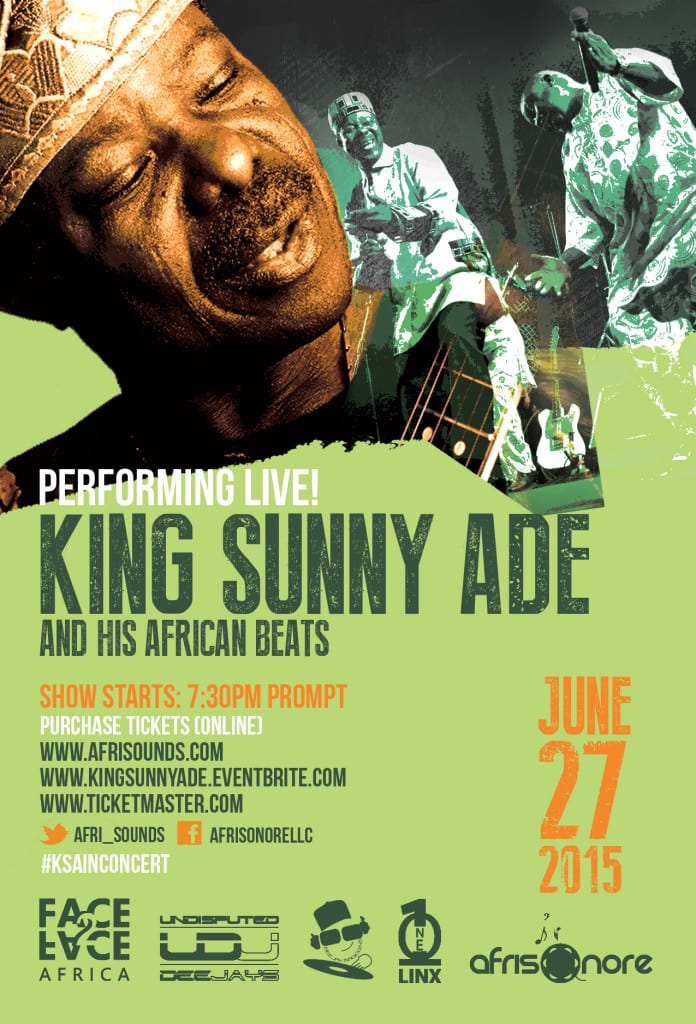 Washington, D.C. – Afrisonore is proud to present world music pioneer and African  cultural icon “The  Chairman King Sunny Ade (KSA) who will bring his mythical  Juju Music  to  the Howard Theater  for one night only on Saturday,  June 27th. His magical sounds are sure to leave the audience spellbound; this is not a show to be missed!

King Sunny Ade is single‐handedly responsible for the evolution of Juju Music, ushering a sound that has transcended decades and inspired generations. With his masterful command
of the talking drums, guitars, and his gifted song writing, King Sunny Ade’s music has
spanned five decades, achieving great commercial success and critical accolades.

The  Chairman  has  been  nominated  for  a  Grammy  Award  twice;  he  is  the  first  African musician  to  receive  this  honor throughout a career that has  ruled  the  Western  pop  scene  while  staying  true  to  his Yoruba roots.

King Sunny Ade’s music has embraced rudiments of Afrobeats, incorporated
modern  elements  like  pedal  steel  guitars,  synthesizers,  and  even  computers.  KSA  will  be
playing in Washington, DC on Saturday,  June 27, 2015 at The Howard Theatre.

The show starts at 7:30 PM. Tickets for the event are on sale at
https://kingsunnyade.eventbrite.com, www.afrisounds.com, and www.ticketmaster.com.

Born  as  Sunday  Adeniyi  in  Oshogbo,  Nigeria,  King  Sunny  Ade
entered  the music scene in 1966 as a samba player in a comedian’s  troupe. The  following
year, Ade formed his own group, “Green Spots,” and dropped his first record. Over the years
that followed, KSA’s group changed names to “African Beats” and then to “Golden Mercury.”

His music has evolved with stylistic changes and combining genres, such as
Fela Anikulapo Kuti’s Afrobeat, and later on incorporated orchestral sounds, using a
multiplicity of guitars, drums, percussion, and electronic instruments like synthesizers.

King Sunny Ade has collaborated with other greats like Manu Dibango and Stevie Wonder.
With a larger‐than‐life musical  career spanning five decades and a mammoth contribution to the cause of Juju music, King Sunny
Ade is undoubtedly one of the finest musical exponents from West Africa.

Afrisonore  is  a  multi‐functional  website  profiling  African  music  and
connecting Its audiences worldwide. Afrisonore believes in the cultural potency of African
music  and  the  need  for  a  tool,  which  can  be  utilized  for  not  only  promotional  means  by
African artists but also as a public forum and entertainment outlet for consumers. Afrisonore
is forging the path to becoming one of the largest portals for African entertainment news in
the  world.  Through  relevant  and  timely  content,  African  music  enthusiasts  can  count  on Afrisonore to capture the untapped vibrancy of the most artistic continent on the planet.