Cameroun began their World Cup in style as their South American counterparts were subdued to sheer Africana football superiority.

The blonded-head Enganamouit was a threat the entire match as she scored in the 36th, 73rd, and 94th minutes.

For half an hour, the game seemed very low key until the 34th minute, when Cameroun’s striker Enganamouit assisted Madeleine Ngono Mani in her opener for the African nation.

Two minutes later, the star of the day Enganamouit beat Equador’s goalkeeper for her first of the tournament.

Enganamouit scored again twice to cap off a captivating start to the tournament.

With a well-represented fan base in the stadium, the Super Falcons put up a fine display against European power house Sweden.

All of Nigeria’s goals came from their previous graduates of their FIFA U-20 World Cup Campaign. 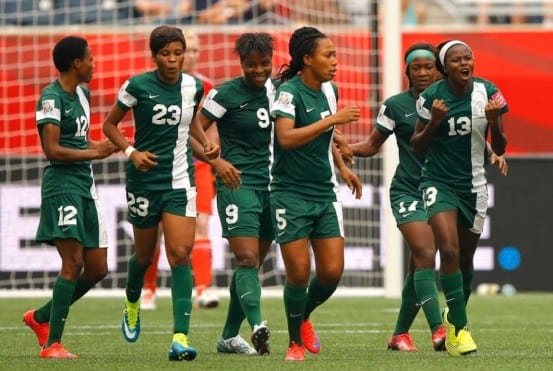 Having never beaten Sweden, a draw for Nigeria felt like a win as things were not going as planned for the Super Falcons in first half.

Nigeria’s Desire Oparanize scored a own goal to capture the state of thing.

Soon Sweden extended their lead, but this did not deter the ever-effervescent chants of the green-clad Nigerian supporters in Winnipeg Canada.

The support propelled the Super Falcons to comeback in a 3-minute time span.

Then in the 53rd minute, Asisat Oshoala opened her account with a skillful solo effort.

Sweden took back the lead in the 60th minute and all seemed lost for the West African ladies until a Francisca Ordega goal redeemed her team with only 3 minutes to the end of a fantastic game.