A team of thirteen Egyptian and Italian scientists examining an iron knife exhumed from the tomb of mummified Egyptian King Tutankhamun has announced that the blade was made with iron from a meteorite, according to the Guardian.

Since its excavation by Howard Carter, a famous English archaeologist, the blade has puzzled many researchers with its special ironwork and inimitable features such as the golden handle, jackal-decorated sheath, lily and rock crystal pommel.

No part of the knife’s metal blade has rusted despite having been buried with the boy king for about 3,300 years.

After decades of coordinated scrutiny using an x-ray fluorescence spectrometer, the scientists discovered high levels of nickel and cobalt on the blade, which they believe points to an extraterrestrial origin.

A detailed comparison of the content of the blade with familiar meteorites found on the shores of the Red Sea exhibited great similarities between the two.

In their latest publication “Meteorics and Planetary Science,” the Egyptian-Italian research team appears to confirm the long-held belief that ancient Egyptians attributed great value to meteorites, which they believed fell from the sky.

We suggest that ancient Egyptians attributed great value to meteoric iron for the production of fine ornamental or ceremonial objects,” the researchers said.

The uniqueness and high quality of the knife reveals an impeccable mastery of ironwork that existed during Pharaoh Tutankhamun’s reign, which began in 1333 BC during a period known as the New Kingdom. Ancient Egyptian iron workers demonstrated great skill and creativity during that time. 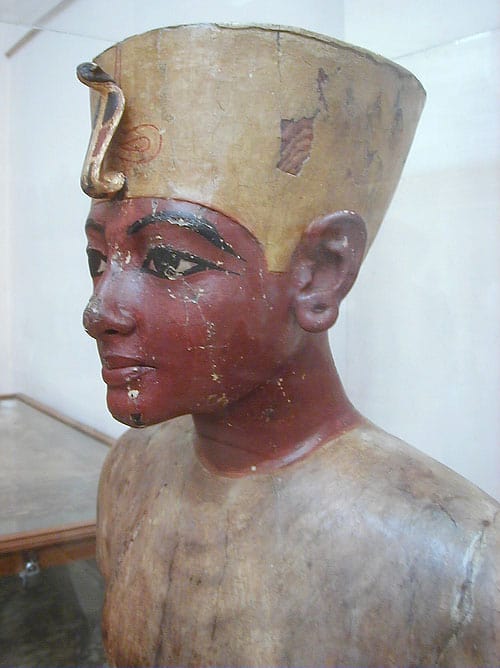 The golden iron blade is just one of the many artifacts recovered from King Tut’s tomb that are believed to have been made from falling rocks, according to the Guardian.

In 2006, an unusual yellowish jewel shaped like a scarab was unearthed from King Tutankhamun’s burial necklace by an Austrian astrochemist who suggested that it was made of glass formed when a meteorite crashed into sand.

Two weeks ago in a show of diplomacy, the government of Israel returned two antique pieces of coffin believed to have been used to cover an Egyptian mummy. The two covers had been stolen from Egyptian tombs, shipped to Dubai and later transferred to Israel for sale.