Aside from being the most popular and important West African folktale character, Kwaku Anansi has travelled across the world finding his home in areas including Jamaica and Netherlands Antilles in the Caribbean; and America. 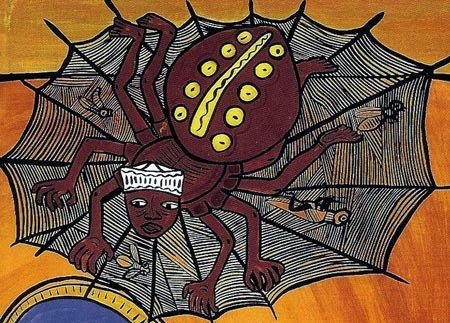 In the Akan setting, Kwaku Anansi is a character with a witty and cunning personality. He embodies wisdom and survival tactics. In the short stories told of Kwaku Anansi, we find that he is usually too smart for himself and ends up facing difficulties which he tries to get out of. He sometimes ends up in embarrassing situations at the end of the story.

There are no facts to prove when the character actually came into existence, however, the stories have existed for as long as can be imagined. The stories are known as Anansesem in Akan culture which means “Anansi Stories”

Kwaku Anansi found his way out of Africa through the Atlantic Slave Trade and found a new home in the Caribbean. Anansi later made it into America. The folktale character has transformed and evolved due to factors such as experiences and alterations in history.

In the Caribbean, Kwaku Anansi is depicted as a “god of knowledge of all stories”. He represents a griot who has kept the history and culture of his people who settled in other parts of the world after being forced out of their original homes. Perhaps Anansi is not affected by change due to the fact that he is not human but can take human form when necessary.

Anansi served as a link between the slaves and their sense of belonging and culture. The stories of Anansi in the Caribbean therefore serve as a means of passing culture to generations who would know nothing about their original home.

Slaves from West Africa who found themselves in the plantation of the Americas and the Caribbean again revered Anansi as a symbol of slavery survival and resistance. Many of such stories are told of Kwaku Anansi using his wit and God-given wisdom to find ways of gaining his freedom or better living conditions despite the harsh situations they were confined in.

In the Black-American community, Kwaku Anansi evolves into a god who created the heavenly bodies teaching humans how to survive on plantations.

Kwaku Anansi has experienced many changes but the character still remains the spider with human characteristics. Sometimes, Anansi appears as a spider with a human head and at other times he is a spider who wears human clothes.  The many variations of his name include Ananse, Anancy, Nanzi and in the southern United States of America as Aunty Nancy.

Kwaku Anansi has featured in comics across the world. In 2013, the character was adapted for film by Akosua Adoma Owusu winning the Best Shirt Film at the 9th African Movies Academy Awards.

In the Akan language, Kwaku is a name given to a male child born on a Wednesday. Anansi is an Akan word which means spider. A direct translation into English will be Kwaku Spider.