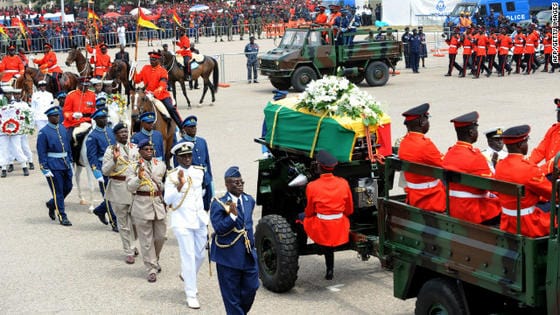 Tens of thousands of people attended the state funeral for the late President John Atta Mills on Friday.

The funeral was held in Accra’s Independence Square. There were about 18 African heads of state in attendance along with US Secretary of State Hillary Clinton, who ended her tour of several African nations in Ghana for this event.

The late President passed away on July 24 of this year after suffering from throat cancer for years. He died just five months before he was set to seek re-election.

The current president John Dramani Mahama spoke at the funeral and said: "Today a dark cloud hangs over Ghana, over Africa and indeed over the entire world. President Mills was the very embodiment of what has been missing from our politics – civility, humility in service, honesty…"

According to the BBC, people gathered in Independence Square before dawn, dressed in the official colors of mourning – black and red.

Chiefs attended with their own drummers who performed personal messages of grief. Dancers also performed accompanying routines to the messages.

The late President Mills was laid to rest in an area next to Osu Castle, which overlooks the Atlantic Ocean.

Mourners waited for hours to send their blessings in lines that stretched up to six miles long outside of the State House in Accra.

John Atta Mills died at the young age of 68. May he rest in peace.