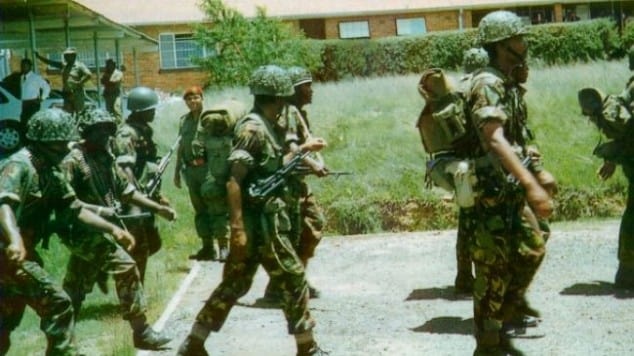 On Saturday, they staged a coup!

“The armed forces, the special forces of Lesotho, have taken the headquarters of the police,” said Lesotho Sports Minister and leader of the Basotho National Party Thesele Maseribane.

“The commander said he was looking for me, the prime minister and the deputy minster to take us to the king. In our country that means a coup,” he added, also saying that he and the prime minister Thomas Motsoahae Thabane had felt the need to leave the country after receiving warnings from the military commander.

“They were driving around the residence of the prime minister and my residence in the early hours of Saturday morning,” he said.

The military have yet to confirm why this coup was attempted, but this is not the first time the small, land-locked nation has been entrenched in political violence in recent years. In June this year, it emerged from the Lesotho Times that there was instability after the unity of the three political parties had given birth to the state’s first-ever coalition government that had effectively collapsed.

Following this, parliament was suspended by the prime minister with the blessing of the traditional king. The South African government warned that it wouldn’t have any such political instability in the Southern African Development Community (SADC.)

In 1998, South Africa also made a quick, blood-splattering military intervention in the country after contentious elections. A South Response is expected here as well.

“They’ve jammed phones, they have jammed everything,” added the minister. Phone, radio and television companies/broadcasters were taken over resulting in a media blackout. Gunfire was heard as early as 4 a.m. on Saturday morning and was still continuing by midday.

Masirebane has accused the Lesotho Congress for Democracy of the coup attempt, but they have denied any involvement despite having made threats to form a new government.

Information is anarchy. Formal governance has begun it’s descent in to the basement of irrelevance.

By 17:30 local time, South Africa had said that diplomacy ought to be given a chance before military intervention. “[We]…call on the commander of the Lesotho defence force to order the army to return to their barracks and allow the democratically elected government of the kingdom to carry on with its business,” the spokesperson of Department of International Relations (Dirco) Clayton Monyela said.

There will likely be more coups or coup attempts in the not-too-distant future because of the small but significant effects of this one. To drive the President and his deputy out of the country is no small feat.

On the chess board, one move is only a small part of the greater picture and both sides get to move. Depending on which pieces move next and how they move, there may be resistance from the SADC, the African Union, and the private sector on behalf of the Lesotho government.

Only time will tell.